During the 2010-2011 academic year, five CISLA seniors were awarded travel grants to conduct further research related to their Senior Integrative Projects. Their experiences are highlighted below. 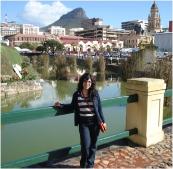 Jazmin Acuna Cantero '11 returned to South Africa to conduct a second internship, this time at the Mail & Guardian, South Africa's most prominent newspaper. There, she had the opportunity to peruse the newspaper's archives, gathering valuable primary materials for her SIP, Race Relations in South Africa: Reconciliation Tested, and learning more about the media's role in the reconciliation process. She also wrote six stories for the newspaper - a blend of comment analyses and news reports - which gave her insight into the processes and elements involved in producing a story that can have significant repercussions for the public. 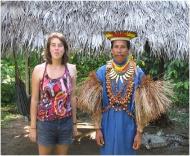 Emily Culver '11 returned to Peru to travel deeper into the rainforest and experience a classic slow boat trip as part of her research on the mobilization of indigenous tribes in the Peruvian Amazon. Most of the Amazon rainforest is accessible only via boat, so for the people of the rainforest, multi-day boat travel is a fact of daily life. She writes, "The reality of travel down the Amazon is extremely challenging for all... The boat was mind-blowingly crowded. When I first walked on Henry II (our ship), there seemed to be no space to walk, let alone hang a hammock....A 10-year old boy noticed me standing there, clutching my backpack in the midst of the chaos of impenetrable hammocks and screaming children. He insisted I could fit and helped me hang my hammock perpendicular to everyone else's. These 6 feet of space were to be my home for the next four days." After the 4-day boat trip up the river, she spent three days learning from an expert about the plants, animals, and politics of the Amazon. The opportunity allowed her to gain valuable firsthand knowledge of life in the rainforest, particularly the connection between political rights and spiritual background in the holistic worldview of the Amazonian indigenous people, which will significantly inform her research.

Janine Gonzalez '11 returned to Argentina to attend a conference hosted by her CISLA internship organization, the Asociacion Argentina de Presupuesto y Administracion Financiera Publica, at which economists and financial managers from several neighboring countries were present. During this time, she was also able to conduct interviews on how people were personally affected by the 2000-2001 economic crisis and directly interact with the Argentinian community. This experience allowed her to deepen her understanding of what she calls "the two faces of Argentina." The fact that many in the provinces outside of Buenos Aires are in economic distress, despite the international recognition the country has received for its economic development and political action, is giving her a new angle from which to approach her SIP on the social, political, and economic transformation of Argentina during and since its 2000-2001 recession. 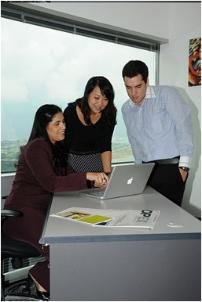 Hector Ramos Samanez '11 traveled to Peru during the month of January to take a firsthand look at studies conducted by the Peruvian and Chinese governments during the negotiation of the China-Peru Free Trade Agreement. He also had the opportunity to conduct interviews with various Peruvian experts on the subject, including the former head of the United Nations Development Programme in Peru and representatives from the Vice Ministry of Foreign Trade, the Lima Chamber of Commerce, and the Peruvian Agency for the Promotion of Private Investment. After completing his CISLA internship in Asia, this second trip gave him the opportunity to do research in the other part of the world discussed in his SIP, which focuses on the political and economic impacts of the China-Peru Free Trade Agreement on Peru's development. 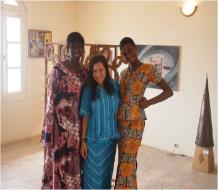 Hannah Shambroom '11 went to Dakar, Senegal and Paris, France, to conduct further research for her project on how contemporary art shapes national identity in post-colonial French West Africa. In Dakar, she attended the Festival Mondial des Arts Negres (World Festival of Black Arts), which showcased the work of black artists from all over the world, including many from Senegal and the surrounding countries. Little information has yet been published about contemporary work emerging from Senegal, so this experience allowed her to see it in context for herself. She then moved on to Paris, where she visited two museums of African art that specialize in "traditional" or early African art and do not include contemporary works. She writes that visiting the museums in Paris was "useful in understanding the symbols and themes present in contemporary works. It was also interesting to contrast the way African art pieces were exhibited in Dakar, by the artists themselves, and the way they were presented by Europeans, who did not necessarily understand the original context of the pieces."