The informal sector in Hanoi, Vietnam 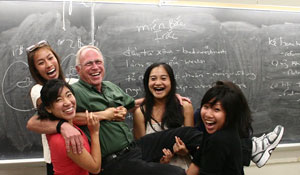 Don Peppard retired from teaching in 2015.

?In Spring 1999, Don Peppard traveled to Hanoi, Vietnam, as part of the College's first SATA (Study Away Teach Away) Vietnam program, the first time he had returned to Vietnam since he was a soldier there in 1968-69. Since then, Peppard has taken two groups of students to do research in Vietnam as TRIPs (Travel, Research Immersion Program), and he has led seven more SATA programs.

Peppard completed the SEASSI program in Vietnamese language during the summer of 2010, and he visits Vietnam at least once a year.

Peppard has taught about the economies of regions in "Urban and Regional Economics" and continues to teach about the public sector in "Public Finance." He also teaches introductory macroeconomics, intermediate microeconomics, and he co-teaches “Political Economy of American Business” with Bill Frasure in the government department.

Following a long-standing research interest in gambling and its public policy implications, Peppard examined the effects of Foxwoods Resort Casino on Southeastern Connecticut.

Other publications include "Net Fiscal Incidence in Michigan," "Toward a Radical Theory of Fiscal Incidence," "Government as Bookie: Explaining the Rise of Lotteries for Revenue," "Mega-Resort on my Doorstep: Local Resident Attitudes toward Foxwoods Casino and Gambling on Nearby Indian Reservation Land," and "Job Quality and Job Satisfaction Among Casino Workers: The Case of Foxwoods."

Peppard was the first recipient of the College's Student Government Association Excellence in Teaching Award in 1989.

"Vietnam has changed my life twice so far, both times for the better." - Don Peppard