Fred Paxton sees himself as both a humanist and a social scientist. He regularly teaches courses on European history from 200 A.D. to the present, early Islamic history from Muhammad to the Mongols, and History 101, "Big History: From the Big Bang to the Future of the Cosmos." Recent advanced courses have included New Approaches to World History, The Middle Ages in Big Historical Perspective: Northwestern Eureope and the American Southwest, 400-1400 A.D. and The Carolingian Age in Europe.

Paxton is the author of Christianizing Death: The Creation of a Ritual Process in Early Medieval Europe (Cornell University, 1990), which appeared in a paperback edition in 1996. His work on this book spurred his interest in sickness and healing in early medieval Europe. Subsequent research has been facilitated by grants and fellowships from the American Council of Learned Societies, the Mellon Foundation, the Fulbright Commission, the Camargo Foundation and the National Endowment for the Humanities. In 1998-99 he was a member of the School of Historical Studies at the Institute for Advanced Studies, in Princeton, New Jersey. 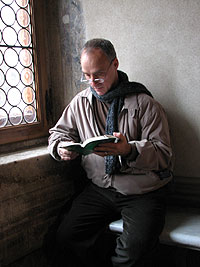 From 1994-2002, Paxton was a visiting professor at the Chalice of Repose Project, in Missoula, Montana. His master's thesis, A Medieval Latin Death Ritual: The Monastic Customaries of Bernard and Ulrich of Cluny (University of Washington, 1980), was published for students in the Project by St. Dunstan's Press in 1993. According to the founder of music-thanatology, Therese Schroeder-Sheker, Paxton's work has placed this recent addition to palliative care of the dying in historical context.

He spent the 2006-2007 academic year as a Fellow of the National Humanities Center in North Carolina. While there, he completed Anchoress and Abbess in ninth-century Saxony: The Lives of Liutbirg of Wendhausen and Hathumoda of Gandersheim (The Catholic University of America Press, Washington, D.C., 2009) and an early draft of The Death Ritual at Cluny in the Central Middle Ages /Le rituel de la mort à Cluny au moyen âge central, published in Belgium by Brepols in 2013. This book is a reconstruction of the Cluniac death ritual from an early twelfth-century manuscript in the Bibliothèque Nationale in Paris, with facing-page English and French translations, a historical introduction and commentary.

He is currently conducting research on the Middle Ages in the American Southwest.

Visit the history department and classics department websites for requirements for the major in history and in classical and medieval studies.

"The European Middle Ages have a special place in a liberal arts curriculum. After all, that is when schools dedicated to teaching the liberal arts first appeared. But the Middle Ages are with us as well in other ways - in our laws, languages, art and architecture, and in our social relations, especially among Jews, Christians and Muslims. Knowing how those social relations developed from late antiquity to the onset of modernity can be key to understanding major issues in our world today." - Fred Paxton