Soon after arriving at Connecticut College, Leslie Brown worked with the department to start a new major in astrophysics and a minor in astronomy. Believing that student involvement is important for both her and the students, Brown includes students in her research and has also acted as adviser to students' theses and independent studies. 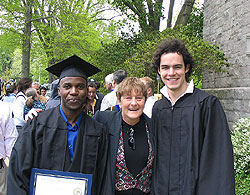 She has developed two new courses for the major and minor sequence: "Introduction to Astrophysics", and "Observational Techniques in Astrophysics," Astronomy 310, The Origin and Evolution of Our Universe: An Astrophysical Perspective.

More recently she has taught Physics courses: Electromagnetic Theory (Physics 324) and Thermodynamics (Physics 220). She also teaches "Solar System Astronomy," an introductory survey course concentrating our our planetary system; "Stars, Galaxies and Cosmology," an introduction to the means by which humans learn about the cosmos.

Brown is responsible for maintaining and using the two observatories on campus, and conducts public observing nights and lectures in astronomy.

She was an invited speaker in a special session, "Astronomy Education and Public Outreach, Research at Undergraduate Institutions,'' at the January, 2004, American Astronomical Society's meeting in San Diego. Her talk was "The Past, the Present and the Future of Undergraduate Research in Astronomy at Connecticut College." She spoke in Washington, DC, at the January, 2006, AAS meeting in a special session on "Instrumentation for Small Observatories."

Brown was the recipient of an $85,000 grant from the National Science Foundation to equip the new observatory at Connecticut College. She also received a grant from Research Corporation for long-term optical studies of nearby Seyfert galaxies and BL Lac objects, both of which are types of active galaxies.

Brown is currently working on further observations and analysis of the linear polarization structure of several strong centimeter superluminal quasars and extending this work into the millimeter regime. These observations reveal the orientation of the source magnetic fields and in turn help astrophysicists understand the columnation mechanism operating along the jets and the central power source fueling the emission.

"I love the stars too much to be afraid of the night."