Professor Chu remembered for his love of learning 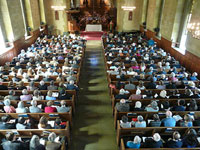 Charles Chu’s artistry, teaching and spirit were the heart of his being.

But words and sayings, said his daughter Paula Chu, were touchstones for him.

“Pop was always seeking center, seeking meaning with words and the ideas they allowed him to form,” she told 350 alumni, faculty, staff, students and family members who gathered in Harkness Chapel on April 18, 2009 to celebrate Charles Chu’s life and art.

“He thought in lists and aphorisms -- they delighted, guided, and comforted him. He loved through them.”

Read remarks from the memorial service.

Chu, an emeritus professor of Chinese, brought together poetry, painting and calligraphy in the traditional Chinese literati style. He died last October at the age of 90. His wife, Bettie Simmons Chu, died Feb. 28. Her memorial service was the evening before his.

Chu came to Connecticut College in 1965 from Yale to start a new program in Chinese, and he was the founding curator of the College’s Chu-Griffis Asian Art Collection.

Jonathan Spence, the Sterling Professor of History at Yale and one of the foremost scholars of Chinese civilization, said Chu broke ranks with his colleagues by creating a program that set Chinese in the context of the liberal arts. The Connecticut College program was one of the first to focus not just on language, but on politics, culture and art, he said.

Tek-Wah King, senior lecturer in Chinese, played a recording from The Fisherman’s Revenge, about a fisherman who reminded King of Chu for his tenacity and courage. Chu loved memorizing the operatic scores and would occasionally belt out a tune. He also enjoyed playing pieces on his er-hu, a Chinese fiddle. The memorial opened with an er-hu performance by local musician Gabriel Kastelle.