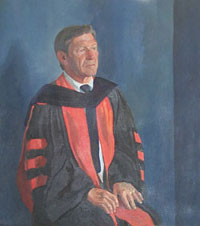 Connecticut College's Reunion 2003 (May 30-June 1, 2003) was dedicated to President Shain. A community gathering in his memory was held on Saturday, May 31, 2003, at 1:30 p.m. in Harkness Chapel. A post-gathering reception followed at the Charles E. Shain Library, where there was an exhibition of Shain memorabilia.