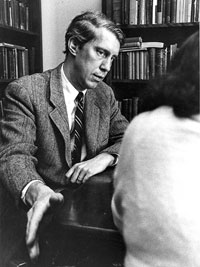 Dirk t. D. Held was the Elizabeth S. Kruidenier '48 Professor of Classics and chair of the Classics Department at Connecticut College.

Professor Held joined the faculty in 1971 and exemplified the College's commitment to excellent teaching, research and shared governance. His work focused on philosophy and the relationship between antiquity and the modern world.

The College community gathered to remember Professor Held at 4 p.m. on Friday, April 27, 2012, in Harkness Chapel. He will be deeply missed by colleagues, students, alumni and staff.