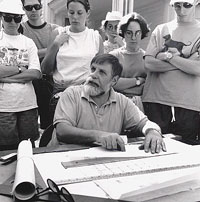 A campus memorial service was held at 1 p.m. on Sunday, April 22, 2007, in Harkness Chapel. View the tribute by Dean Theresa Ammirati.

He received his B.A. from Queens College of The City University of New York and an A.M. and Ph.D. from Brown University.

He worked on 22 archeological digs in New England, Israel, Peru and Alaska. In addition to the regular courses he taught in archeology, he also taught a summer course in which students participated in an archeological dig.

He also gave more than one hundred lectures to historical societies, schools and museums. Professor Juli was vice chairman of the Connecticut Historical Commission and worked on a variety of public service and consulting projects.