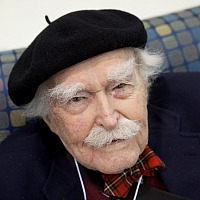 A specialist in the history of Renaissance and Baroque art, Professor Knowlton joined Connecticut College in 1967 and retired in 1983. He was the first chair of art history, after the art department was divided into studio art and art history. In 1974, he introduced film history to the College curriculum, subsequently developing four initial courses in film and providing the foundation for today's film studies program. Also in 1974, Professor Knowlton started the Connecticut College Film Society which, for many years, screened classic movies on campus.

Professor Knowlton earned his bachelor's degree from Dartmouth College and his doctorate from the Institute of Fine Arts at New York University.

When Professor Knowlton retired in 1983, then President Oakes Ames said of him, “John's breadth of knowledge, his high standards, his well-formed opinions and sense of wit have left deep and fond impressions on his many students and close colleagues.”