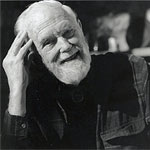 Richard H. Goodwin, a pioneering national leader in the field of land preservation and an accomplished botanist who delighted in exploring woods and streams in places as diverse as East Haddam and Africa, was born in 1910 in Brookline, Mass., to a like-minded family. His mother took him on nature walks and introduced him to birds and flowers; his father was a professor of electrochemistry at the Massachusetts Institute of Technology. A great-uncle, William Gilson Farlow, was a preeminent Harvard researcher of plant reproduction, and a cousin, David Hunt Linder, was internationally known for his analysis of fungi.

At the age of 14, during a trip across the Great Lakes and then the northern United States, Professor Goodwin was struck by the bleak deforested topography of Minnesota. He entered Harvard in the fall of 1929 thinking he’d be a forester. “I loved the outdoors and wild places and had the thought that by entering that field I might be able to contribute toward the rehabilitation of devastated country,” he wrote in 1997.

But he was captivated by botany. He was astonished to find Opuntia humifusa (prickly pear cactus) smothered by grasses, but growing nonetheless, on Cape Cod, and to discover more than 80 species of wildflowers simultaneously in bloom on the slopes of Mount Equinox in Vermont. He was studying the genetics of goldenrod as a junior when his adviser suggested an experiment that would establish the relationship between Solidago asperula, thought to be a hybrid between S. rugosa (an upland member of the goldenrod genus) and S. sempervirens (seaside goldenrod). Goldenrod normally blooms during late summer, but Professor Goodwin discovered how to force the flowers to blossom in spring. This allowed him to present his fiancée, Esther Bemis, with a bouquet of Solidago at their June engagement party.

Professor Goodwin’s doctoral dissertation, based on the developmental studies of these goldenrods, launched him on a research career in experimental plant morphology. This path took him from plant hormones to growth inhibitors, to effects of light on growth, to fluorescent compounds and finally to patterns of root growth.

The Goodwins traveled widely, especially in the early years of their marriage, and worked together in the field. They went to Cuba, Panama, the Belgian Congo, Kenya and Denmark, but by 1938 had settled at the University of Rochester. There, Professor Goodwin managed his first land preservation project. He helped the Bergen Swamp Preservation Society by locating maps of the land, talking with farmers and arranging the first purchase – a five-acre parcel for $125. Today the preserve encompasses 2,000 acres.

In 1944, Professor Goodwin accepted a position as a professor of botany at Connecticut College and became director of the College’s Arboretum. He first visited the College in 1933 for a meeting of the Botanical Society of America. His interest in conservation flourished, as he recognized land ownership was the most effective method of preservation.

During his 30-year tenure, the Arboretum expanded from 90 acres to more than 450. The Goodwins frequently contributed their own money for these purchases. His acquisitions included Mamacoke Island, a peninsula jutting into the Thames River opposite the Naval Submarine Base. Two years after the College purchased the 40-acre parcel in the late 1950s with $15,000 in gifts, a company that was dredging the Thames for nuclear submarines was looking for a place to deposit the materials scooped from the riverbed. “They were prepared to offer over three times what we had paid for the entire property,” Professor Goodwin wrote in 1999. “They pointed out that after the mud settled we would have a prime industrial site. It was a great satisfaction to be able to tell them they were two years too late.” Today the Arboretum is an important natural laboratory for Connecticut College students. This protected space also is an invaluable buffer that preserves the College’s beautiful campus.

Professor Goodwin was also active in land conservation beyond the borders of the campus, from California to his own backyard in East Haddam. He was an early member of the Nature Conservancy and served twice as its president. In 1964, when elected to his second term, he turned the Arboretum over to fellow Connecticut College botanist William Niering, ended his research work and focused his efforts on conservation. He transformed the Conservancy from a regional group with 2,000 members to one of the nation’s top conservation organizations.

Professor Goodwin remained an energetic and inspiring teacher, and in 1969 he was a leader of the effort to establish a major in human ecology (now environmental sciences) at Connecticut College. The program, linking the study of science and public policy, was one of the first of its type nationally at an undergraduate institution. The College’s Goodwin-Niering Center for Conservation Biology and Environmental Studies (renamed the Goodwin-Niering Center for the Environment in 2010 ) was named in honor of these two influential professors.