Comments upon the announcement of Rosemary Park as Connecticut College's fifth president, 1947

On the home front Miss Park was welcomed as friend and colleague by trustees and faculty and received enthusiastic support from students, as shown in the editorial, “Our Hearts and Hands to You” (News, May 14, 1947)

. . . the inauguration of Miss Rosemary Park as our new president will be an extremely enjoyable event as well as an important one. She has been associated with the college community for several years; and we have come to know her, to like her, to admire her. And, as we would feel toward a friend on whom we have placed our hopes, we take pride in Miss Park’s latest achievement. The requirements for a college president are many and varied. In Miss Park we feel that they are fulfilled. In academic matters, she has had valuable experience as a professor both at Wheaton College and at Connecticut. She has learned the business aspects of college administration during her two years as Academic Dean. Her charm and poise on social occasions has been outstanding. Above all, her understanding of students, gained during her years as dean of freshmen, proves her suitable to take over the position of president. (page 143)

While all institutions are subject to planning at certain times, education, more than any other institution, involves planning at all times; planning is, indeed, its very essence. Educational planning, however, is more complicated than any other type since all the quantities concerned are x quantities. Education pretends to prepare an as yet undeveloped human being for life in a world of which the educator can know little - for life in the future. (p. 143-144).

To summarize her achievements, she gave the curriculum new form and life, enhanced the College’s academic prestige, enlarged the student body by a third, added the Student - Alumnae Center and the North Complex, and, through the Fiftieth Anniversary Fund, kept the College solvent. Her record was indeed so distinguished that it attracted attention on other campuses and led to her being claimed for widening responsibilities (page 147). 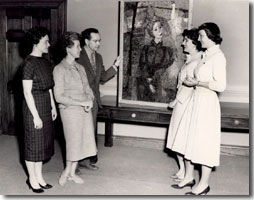 Upon Introduction of the Four-Course Plan, 1961-1962 Academic Year

After a long round of discussions, Connecticut’s Four-Course Plan was introduced in the fiftieth anniversary year, 1961-62. Liberal arts remained at the heart of the program, but semester courses became the norm with a trend to seminars meeting once or twice a week. Probably the greatest benefit to he College was the critical survey of the entire course offering and, as seems to be the cyclical need of faculties, the reinvigoration of the curriculum, which was ‘born again’ in the process. Tests for exemption, advanced placement, and credit were now required so that each course in the total (reduced from forty to thirty-two) was guaranteed to be a real step forward. Special seminars, reading week, independent study, and honors work spurred student initiative.

"[This new plan] will increase the intensity of learning and the effectiveness of teaching at the College. It is a recognition on our part that college study is something more than memorizing. It is this strange kind of process we call ‘thinking.’ You can learn very rapidly when you’re young, but to think takes time. So I am convinced that this change . . . is an admirable one." (p. 148).

“Obviously, the greatest tool in this academic production is an alert, sympathetic faculty. Seldom, I think, has a college rejoiced in a faculty of such distinguished caliber as our students presently enjoy.” (Report, 1956, page 149)

“The stature of Connecticut’s faculty is such that the mere presence of some members is attracting young scholars of remarkable potentia.” (Fiftieth Anniversary Report, page 149)

During President Park’s administration the student body, which had added only one hundred in the previous decade, grew from 838 in 1947-1948 to 1,116 in 1961-1962. Meanwhile college attendance in the nation grew from 2,338,226 to 4,174,936. The level of popular education had been steadily rising through the years until every able high school graduate now claimed the right to a college education. This new situation President Park regarded not as a problem but as a challenge, offering the College an opportunity to expand its usefulness.

"Institutions which enjoy public confidence have a responsibility to be alert to public needs. For, however high or low a motive may bring students to apply for admission, the college faculties in America, once a student is admitted, have an opportunity to enrich and ennoble youth such as was never before granted to the teaching body of any nation.” (page 156) 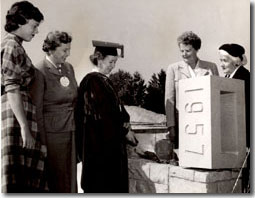 At left: Laying the Crozier-Williams cornerstone: from left Gretchen Diefendorf '58, Sally Becker, President Park, Ruth Stanwood, Professor of Physical Education, and Mrs. James Morrison, secretary of the Board of Trustees.

Construction of the College Center at Crozier-Williams

A milestone in campus life was reached on October 5, 1957, when the cornerstone of Crozier-Williams, the long-awaited student-alumnae center, was laid amid great rejoicing. Here at last would be modern facilities for the Physical Education Department and swimming pool, bowling alley, a dance studio, a snack shop, and lounges. In the Sykes Wing the alumnae, whose office had been in temporary quarters in Woodworth House, would find a campus home of their own for meetings, records, and publications. (page 161)

Not surprisingly, President Park was showered with honorary degrees. While at Connecticut she was honored by ten institutions (Wesleyan, Trinity, Mount Holyoke, Douglass, Wheaton, Yale, Brown, Bridgeport, New York University, and Columbia) and later several more. The University of Bridgeport citation in 1962 was typical: "Your interests extend beyond formal scholarship to embrace every aspect of life from Connecticut’s prison conditions to her forests and parks, from mental health to television, from theological fellowship programs to the American Academy of Arts and Sciences, from Phi Beta Kappa to the Institute of International Education. Throughout the years you have indeed practiced your own precept: that the scholar must accept a responsibility to the larger community."

For long-range planning President Park in 1951 established the key Development Committee with representatives of all branches of the College. Charged with studying the needs of the College, including matters of educations, personnel, buildings, and inevitably finances, this committee has played a central role not only in guiding policy but in keeping all parts of the College informed as to problems and programs. (page 170)

President Park initiated the Connecticut College Associates, a group of nonalumnae friends who would make gifts ‘to be used at the President’s discretion.' (page 170)

On the Fiftieth Anniversary Fund

. . . President Park in June, 1958 announced the Fiftieth Anniversary Fund, setting the goal at $3,100,100 by 1961, the anniversary of the founding of the College. . . The Alumnae News (Fall, 1958) put it succinctly: "Our one purpose is to make sure that the College will be able to offer in the future the kind of education which it now offers and which it has offered in the past." (page 170) 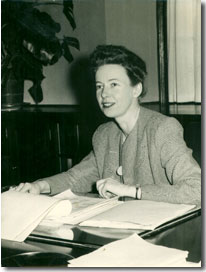 President Park then took on a new task — to go across the country and campaign for the fund. With mixed amusement and frustration she reported meeting executives who still questioned the need for higher education for women, but such attitudes only quickened her missionary zeal. She saw her task in explaining the goals of one woman’s college as part of the larger task of education the American public:

"It [money-raising] is a new and immensely important task of the college president. Seen from the underside - fund-raising - it is often thought not commensurate with the dignity of a college executive. My experience however, . . . makes me feel that fund-raising. . . is of the highest educational importance. If the private educational institution is to remain free, it is essential that the college explain to a widening circle of the public what the non-tax-supported institution does and why it should continue as an integral part of the American system of education. This is actually what fund-raising is from the top side. Since the most authoritative voice of the college is the president’s, part of his responsibility must lie, . . . in the area of public education or fund-raising." (Report, 1946-1962)

At Commencement, 1961, it was triumphantly announced that, through an extraordinary cooperative effort, the goal had been reached. Some 750 friends had worked on thirty-four area committees chaired by alumnae, and contributions had been received from 6,600 donors in fifty states and fourteen foreign countries, as well as from 125 foundations and corporations. Hardly less important was the financial support secured was the heightened prestige of the College, whose name had been carried to the far corners of the country. (page 170-171)