Reprint from the Herald Tribune, February 22, 1947 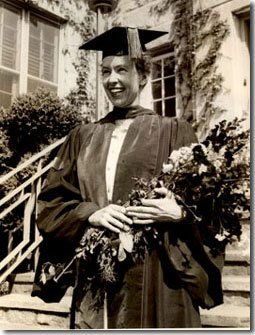 Dr. Rosemary Park, academic dean of Connecticut College, has been appointed fifth president of the college, succeeding Dr. Katharine Blunt, who retired last June, it was announced today by William H. Putnam, chairman of the board of trustees.

Dr. Park, who is thirty-nine, has been acting president since Dr. Blunt’s retirement. She joined the Connecticut College faculty in 1935 as a language instructor.

The college’s new president is the daughter of Dr. J. Edgar Park, who was president of Wheaton College, Norton, Mass., from 1926-1944, and the sister of Dr. William E. Park, president of the Northfield Schools, in Northfield, Mass.