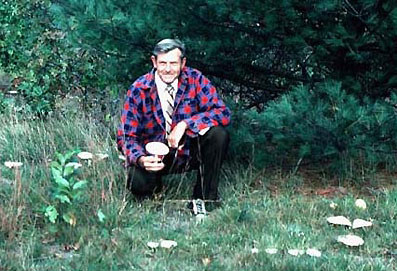 Dr. William A. Niering passed away on August 31, 1999. Bill began teaching botany at Connecticut College in 1952 and was Arboretum Director from 1965 to 1988. His career and accomplishments were very much interwoven with the land and programs of the Connecticut College Arboretum.

College memorial service in the Arboretum

In addition to the funeral and burial service near his home in Gales Ferry, there were two College memorial services. The first, a gathering of remembrance, was held in the Arboretum Outdoor Theater on September 24. On a warm, sunny, very windy day approximately 400 people paid respect and remembered this unique individual. Speakers included President Gaudiani, Professor Emeritus Richard H. Goodwin, Professor R. Scott Warren and former students Keith Bowman '99 and Natalie Hildt '97. Bill's wife Catherine gave an eloquent and moving address that might have been titled "Where Did a Man Like This Come From?" The local Flock Theater offered a beautiful and unusual performance "Grasslands Chant," complete with very large bird puppets and long stalks of Phragmites. Members of the music department provided soothing musical selections and the College's a cappella group The Shwiffs sang "Lighthouse" by James Taylor. College Chaplain Father Larry Lapointe officiated and Rabbi Aron Rosenberg led a responsive reading of Psalm 104. Floral arrangements from plants gathered on campus were organized by Jeff Smith and created by Arboretum volunteers. The function ended with a smorgasbord of tasty desserts, in honor of Bill's well-known sweet tooth.

The second event was tailored for alumni and took place on Homecoming Weekend, October 23. Titled "A Celebration of the Life of Bill Niering." Dr. Marjorie Holland '69, University of Mississippi Biology Department spoke about him as a teacher and a conservationist. Other former students, including Dr. Gregg Hartvigsen '84, Dr. Zell Steever '72, and Glenn Dreyer '83 shared memories with the group and spoke about the inspirational nature of their relationship with Bill. 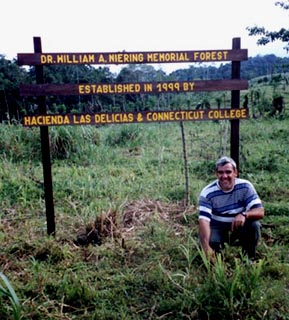 Connecticut College and the outside world will officially remember William Niering in a number of different ways. Some of the memorials are: