Presented at the October 6, 1999, meeting of the Connecticut College faculty

William A. Niering, Lucretia L. Allyn Professor of Botany, came to Connecticut College in the fall of 1952 with appointment as instructor of Botany; that year he taught seniors in the class of 1953. He died this August 30th, 47 years later, just after speaking to the class of 2003 on the importance of environmental stewardship in their roles as citizens of both Connecticut College - and the rest of Planet Earth. With that address, Bill touched half a century of Connecticut College students, and his 47 years here spanned more than half of the life of his - and - our institution - a couple of rare claims for a faculty member toward the end of 20th century.

But Bill Niering will be remembered at Connecticut College and in international scientific and conservation communities for much more than his longevity. 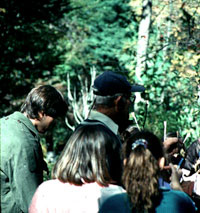 These observations have been made many times, in many places, and by many different people over the past month. They mark an impressive career, but they are not news to most of us at Connecticut College. There has been, however, a great deal less public recognition of Bill Niering's contributions to the science of ecology. As a faculty we are committed to both teaching and scholarship, and a minute in the official records of our faculty meeting is a most fitting way in which to recognize Bill Niering's contributions as a scholar:

Bill Niering was an inspired and inspiring teacher, a scientist of extraordinary vision and breadth - and a scholar whose research and writing gave powerful credibility to his work in the field of conservation. As colleague, mentor, friend, citizen of Connecticut College, and citizen of our so rare and precious jewel of a planet, Bill has been an amazing gift to us all.