by Richard H. Goodwin
Taken from January 2000 Bulletin of the Ecological Society of America. pp. 13-14. 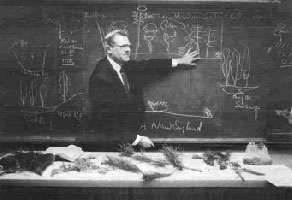 William A. Niering, Lucretia L. Allyn Professor of Botany at Connecticut College, died suddenly on 30 August 1999 at the age of 75. He collapsed shortly after delivering a lecture to the incoming freshmen on the merits of good citizenship and environmental stewardship. He died as he had lived, active in his field and exciting students about the thrill of the natural world and the importance of preserving it. He is survived by his wife Catherine and his son William.

Bill was born in Scotrun, a small town in the Poconos of eastern Pennsylvania, on 28 August 1924, the son of George William and Emma Niering, and grew up as a country boy helping out in his father's butcher shop. After graduating from the Pocono Township High School, he was inducted into the Army in 1942, and served in World War II for 3 years in the Pacific theater as an instructor in jungle living. He then returned to Pennsylvania State College where he received his B.S. in 1948 and his M.S. in 1950. His master's thesis dealt with the flora of Monroe and Pike Counties of Pennsylvania. He went on to Rutgers University, where he studied under the eminent ecologist Murray Buell. His doctoral dissertation dealt with the vegetation dynamics of High Point State Park, New Jersey. He received his Ph.D. in 1952, and began his academic career that same year by joining the Connecticut College faculty, where he remained for the rest of his life, becoming a full professor in 1964.

During those 47 years at the College he was actively engaged in the development and use of the Connecticut College Arboretum, serving as is director from 1965 until 1988, and subsequently as its research director. One of the significant projects that engaged his attention from the year of its inception in 1952 was the long-range vegetation study in the Arboretum's Bolleswood Natural Area. This project remained under his supervision through the years, and has involved generations of undergraduate biology majors and graduate students.

Bill's interest in the preservation of natural areas soon involved him in the early development of The Nature Conservancy. In 1956 he initiated the purchase of the first 63 acres of the Tannersville Cranberry bog near his home in the Poconos, one of the first two preserves acquired by the Conservancy in Pennsylvania. Later this preserve was enlarged by an adjacent property owned by his uncle. The following year he helped negotiate the purchase of the initial 198 acres of the Beckley Bog in Norfolk, Connecticut, now a preserve of about 600 acres and recognized by the National Park Service as a National Natural Landmark. He was one of the incorporators of the Nature Conservancy of Connecticut in 1956 and served as the chair of the Conservancy's Connecticut Natural Area Committee from 1956 to 1958. He then became chair of the State Chapter the year it was formed in 1960. In 1974 he made a gift to the Conservancy of 116 acres of his own property in eastern Pennsylvania.

Soon after his arrival in Connecticut, Bill became acquainted with Frank Egler, who greatly stimulated and encouraged him to embark upon research designed to develop an ecologically sound use of herbicides in vegetation management. Together they developed the concept of "arrested succession" that is central to maintaining vegetation in early stages of succession. This led to the publication of a number of papers and Arboretum bulletins, and to some interesting confrontations with those responsible for the maintenance of roadsides and utility rights-of-way. A number of his and Egler's management recommendations have been adopted by the highway departments and utilities. Later Bill become a trustee of the Aton Forest in Norfolk, Connecticut, a preserve established and endowed by Dr. Egler.

Bill's interest in wetlands soon led him to become involved in the preservation of the coastal marshes, one small sample of which is found within the Arboretum. In 1961 he participated in the production of Connecticut Arboretum Bulletin Number 12, entitled Connecticut's Coastal Marshes: a Vanishing Resource. This little publication gained wide distribution and was a significant factor 8 years later in gaining passage of legislation protecting these wetlands. In 1970 he edited Bulletin Number 17, Preserving our Freshwater Wetlands, which led to another piece of legislation giving these habitats some protection. The extensive research into the dynamics of the wetlands carried out by Bill, his colleagues, and the graduate students gave him authority when he spoke for their preservation. In 1996, he received the Governor's Environmental Award.

In the late 1950s and 1960s, Bill joined force with Robert H. Whittaker to carry out studies on the desert vegetation in the Santo Catalina Mountains of Arizona. Among other things they solved the riddle of the establishment of the giant saguaro cactus, which only produces seedlings in wet years and then requires a nurse plant to survive. The cactus outlives the nurse plant and may grow for centuries. They published five papers together until Whittaker's untimely death in 1980. In 1967 they jointly received the Mercer Award from the Ecological Society of America for their work in Arizona.

Bill served the profession in a number of capacities. In 1967 - 1968 he was on leave from the College to serve at the National Science Foundation as Associate Director for the Environmental Biology Program. He served as secretary to the Ecological Society from 1968 to 1971 and as editor of the ESA Bulletin from 1968 to 1971 and from 1972 to 1974. Then, in 1993, Bill stepped in to serve the Society of Ecological Restoration at a crucial time as the first editor of its journal. Edith Allen, who succeeds Bill as editor, writes that his critical thinking, energy, philosophy of the environment, and cross-disciplinary knowledge brought the journal from an unknown entity to a recognized international ecological publication. In 1998 he received the John Rieger Award from the Society.

Bill was a superb teacher. Marjorie Holland, who worked for a time as a director of the Society's Public Affairs Office, writes, "In the late 60's Bill Niering inspired, challenged, and helped students do the best they could in each of his classes. He hoped that many of us would pursue careers in ecology, conservation biology, botany, forestry and restoration ecology. In fact he once said, 'I hope to get students excited about the subject and to become involved as activists, to leave the world a little better than they found it.' His classes were always electrifying. I remember as an undergraduate feeling shivers run down my spine while Dr. Niering was lecturing."

Part of Bill's success as a teacher was that he inspired by his example. It is the exceptional scientist who exhibits his total commitment through his way of life-at home, at church, at place of work, in the community and in the world at large. At home Bill practiced his ecological principle by minimizing the size of his lawn and using a push mower. He promoted the concept by starting a movement called [Smaller] American Lawns Today (SALT). At his church he drew up a sound ecological plan for the use and beautification of its grounds. At the College, he endeavored, by developing a recycling program and by other means, to get the institution to become an environmental model. I have already touched on some of his environmental activities in the state and in the nation. In 1995 he received the Margaret Douglas Award for Conservation Education from the Garden Club of America.

As chair of the Botany Department, I was able to persuade Bill Niering to join the Connecticut College faculty, and we have been close friends ever since. He wedding reception took place in our home in New London. We collaborated on a number of enterprises, especially during his early years at the College. He was founder and director of the College's Goodwin-Niering Center for Conservation Biology and Environmental Studies, which was named in his honor in 1999. In 1992 he was chose to serve as acting president of the College while the president was on leave. In 1998 he was recipient of the Connecticut College Medal, the institution's highest award.

My last visit with Bill was in his laboratory 5 days before his death. He described with enthusiasm a trip to Costa Rica from which he had just returned, where he had arranged for the reforestation of a tract in that country, for a carbon sequestration program being funded by the College. We discussed his recent work in Arizona, where he had been revisiting with Don Falk the sited he had previously studied with Whittaker to measure the vegetation recovery rates after their protection from grazing, and he showed me the proof of an article describing the impact of oriental bittersweet on the development of forest in the Bolleswood Natural Area — the latest contribution to the long-range vegetation project initiated 47 years ago. With Bill's death Spaceship Earth lost a wonderful friend.

William Niering produced close to 200 publications during his lifetime, but to my knowledge they have not yet been compiled in an adequate bibliography*. His scientific contributions cover a wide geographic range, from the spruce-fir forests of Minnesota and the deserts of Arizona to the ecology of Kapingamarangi Atoll in the South Pacific, the vegetation of Australia, and dune restoration in South Africa. His numerous papers on vegetation management and conservation are cited in Connecticut College Arboretum Bulletin Number 32, published in 1991. His books and vegetation monographs deserve listing in this resolution, and I have also included a number of his other publications, which give an idea of the wide range of his interest.

*(Recently an "adequate bibliography" showing a near-complete compilation of William A. Niering's publications has been posted on this site along with his curriculum vitae.)