Michael Collier '76 Professor of English, the University of Maryland - July 16, 2007 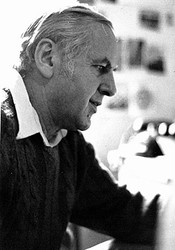 ‌I’ve never felt as fully alive as when I was with William.

If I happened to miss a shadblow tree in full bloom in the understory along the road, William was there to point it out.

Or the time I was chauffeuring him in his car to a reading in Vermont and he grew impatient with my slow driving – “I’ll pay for the ticket,” he said.

Or in the years after his stroke, when he would claim resolutely that each day was a day for improvement and for announcing in his own astonished way that he was a happy man.

Or when last summer at the podium in the Bread Loaf Theatre he recited more clearly than ever “A Major Work,” “The Illiterate,” and “Parents.”

Or sometimes as in a recurring nightmare, I relive the U-turn he made into oncoming rush hour traffic the other side of the tollbooths at the Throgs Neck Bridge.

Or the enduring example of love he provided with Richard.

In all the hours I spent with William I was always alert, at times exhaustingly alert, from the fear of what I would miss. When I was with him there was only one thing I wanted: to be with him more, to be with him longer. I know this is how everyone felt, including Bulgaria, which was a whole lot of people wanting to be with him: they made him a citizen.

William was a defender and a rescuer, a believer in the lost cause, a stand-taker, a provocateur, and a benefactor. He was modest about almost everything except his immunity to poison ivy and his knowledge of prosody and trees. He was self-deprecating, and he exasperated us when he insisted on giving his poems a B+. He made each of us much better than we had any right to be. Even the flora and fauna improved under his supervision, whether they were the trees he tended in his nursery or the feral tomcat that lurked around his premises.

He was a St. Francis to people as well, or he tried to be. And he was loyal, fiercely so, and principled. His loyalty once caused him to resign from the Bread Loaf Writers’ Conference when a staff member he admired had been unfairly dismissed. As a teacher, he had a light but direct touch and could make a profound connection simply through a moment of sustained attention as when he suggested to a student her poem might be improved by the addition of a “nasturtium or an egg beater.”

What drove William’s loyalties and affinities and made him a remarkable friend, poet, and teacher was a deep interest in people and a belief that each of us wrestled with one or two or several demons; that we all possessed flaws but were redeemed and ennobled by our efforts to face them. What he said about Frost in “In Memory of Robert Frost” was equally true for him:

Everyone had to know something, and what they said
About that, the thing they learned by curious heart,
They said well. That was what he wanted to hear,
Something you had done too exactly for words,
Maybe, but too exactly to lie about either.

He was patient in his ability to listen for what people knew and he had the quiet power of eliciting it. But he was impatient with phonies and poseurs and took great pleasure lampooning them or telling jokes and stories at their expense.

About ten years ago, I was extolling the virtues of the English painter, Francis Bacon, to the painter Emily Maxwell. William was in the room with us, listening intently. I could tell he wanted to get into the discussion but was searching for the words. Finally, they burst out of him clear and true and in character, "But so what!” he declared. “Bacon, unhappy man!”

In his poems, William’s insistence on form was the verbal equivalence of manners, the enacting of ceremony, protocols really for controlling the emotions that lay beneath the experience at hand. His use of form was in no way merely decorative. Form was rooted in his life. It was only in recent years when it became harder for him to get up out of a chair on his own that he stopped standing up whenever a woman entered a room. This was part of the courtly and decorous, the elegant and fastidious side of William that we admired, learned from, and sometimes felt its admonishing presence.

Although William loved to use words such as praise, cheer, joy, morale – words of uplift and optimism – they were not meant to drown out, as he put it, “the umpteen kinds / of trouble that you’ll see,” but rather give encouragement. One of William’s most compelling, direct and chilling personal statements comes in “The Wreck of the Thresher,” when he writes: “I met a monstrous self trapped in the black deep.”

I don’t mean to suggest that William’s famous optimism was a false front. No one could have faked the generosity and openness residing in his face, the surprise and delight in his smile, especially in his later years when the day-to-day business of living became more difficult. His optimism was hard won and the result of having made a choice that became a conviction to remain resolute in the face of the worst of human disasters, especially his own.

During spring break of 1975, I attended a reading he gave at the New School in New York City. After the reading, William invited me to dinner, where there was mention of Eugenio Montale having recently been given the Nobel Prize for Literature. Someone in the group reported that Montale's response to the award was, "In a life filled with unhappiness, this makes me a little less unhappy.” Montale's words brought vocal and head-shaking approval from different parts of the table. But from William there was silence, uncomfortable, ruminating silence that soon turned to argumentative disapproval. He couldn’t understand what there was to praise in Montale’s ungrateful attitude. William argued that it was a writer’s obligation to speak against despair. Everyone had had a lot of wine and William vodka. There was a kind of squaring off between him and a few others, while most, after making feeble mediating gestures, remained neutral, though ill at ease.

What I witnessed in William’s argument at dinner was how conviction can distort a man's style. The usually decorous and chivalrous citizen poet who used form and convention – social and artistic – to harness his feelings and emotions allowed me to see what those feelings themselves were like.

Perhaps most of those at the dinner thought William wrong-headed and quarrelsome, but what I saw, as his student, was an act of courage. It was courage lacking finesse, perhaps, but courage nevertheless. It was the same courage that gave him the steel to fly fighters and escorts off the deck of aircraft carriers during WWII and to reenlist to do the same in the Korean War. And it was the same courage that kept him alive and in character and allowed him to cope with decades of debilitation.

For almost twenty-five years, I consoled myself that while it was unlikely he would ever write poems again or preside over his work fully or lay out a meal for friends in Uncasville, at least I had William and that his courageous presence, his insistence that his ability to speak was always improving – “I don’t know why that is but it’s so,” he might say or “Everyday a little better” – was still better than I deserved. The last time I spoke with him, in early May, he struggled to talk, but I could hear the assent and affirmation in the voice of his that remained. He only needed a shred of his voice to convey all that he was.

Since his stroke, I’ve practiced saying goodbye to William many times. I thought it would be good to prepare myself for what seemed inevitable. And so, I imagined his death frequently and the phone call from Richard. But now that he is gone, I find myself in an empty place where practice and preparation are useless. I must admit as well that I thought and hoped he would never die.

I feel now that there are no great men or women left in the world. Not only is William gone but gone with him is a way of being that was unique to him and his times, and gone, too, the immediacy of the friendship, the demonstrations of loyalty, his example of faithful love, the decorousness, the smile and the eyes with their invention of blue, the mild provocation – gone, and what is left is the purest form of grief – a lucky gift to be given but awful, appalling, and enormous.

Like all of William’s friends, I loved being with him or knowing that I would soon be with him or that he was with others I admired, with Richard. Like the Bulgarians, I suppose, we all wanted to make William a citizen of the country he helped us to discover and define, a country he led us to by way of his curious heart.

- Michael Collier '76 Professor of English, the University of Maryland