In his second visit to Connecticut College in recent months, U.S. Sen. Richard Blumenthal praised the institution’s leadership and the efforts of its student body to prevent sexual assault, a national issue that has impacted college campuses across the country.

“This generation is educating us,” Blumenthal told a gathering of student leaders and campus administrators, including College President Katherine Bergeron, on Friday. “And your good instincts and your caring about other students are really what we are seeking to spread to other schools.”

Connecticut College is featured as a “Best Practices” institution in a report Blumenthal released after his previous visit to the campus last April.  He says the College’s comprehensive approach to sexual assault prevention, including an active bystander intervention program, is a model for other colleges and universities.

The College launched its program five years ago with a grant from the U.S. Department of Justice’s Office on Violence Against Women. The grant funding enabled Connecticut College to hire and train staff and implement effective programming on campus. When the three-year grant funding was completed, the College’s senior leadership committed to funding the program in full, including a full-time director of sexual violence prevention and advocacy.

“It was visionary to seek a Department of Justice grant two years before the ‘Dear Colleague Letter’ was distributed,” Bergeron said. “I am very proud to have arrived at a school that is so ahead of its peers.”

The “Dear Colleague Letter” was issued by the Department of Education in 2011, and provided colleges and universities with guidance on their responsibilities under Title IX, including how they respond to accusations of sexual assault and how they approach education and prevention.

“There is something about a culture of accountability that has helped change the conversation. People believe that it is their responsibility to speak out when something isn’t right,” she said.

One program has empowered more than 500 students to take responsibility for helping to prevent sexual assault at Connecticut College. Green Dot, a national program the College implemented in 2010, trains students to recognize situations in which their peers might be in danger or at risk. When they see this type of situation, they are trained to intervene.

“Going through Green Dot training gives you confidence to analyze tough situations and act on them,” Lucas Corrubia ’15 told Blumenthal.

Blumenthal has touted Connecticut College’s Green Dot program as he has worked with his Senate colleagues to develop new legislation aimed at preventing sexual assault at colleges and universities across the country. In June, he facilitated the participation of Darcie Folsom, the College’s director of sexual violence prevention and advocacy, in a roundtable discussion in Washington, D.C., hosted by U.S. Sen. Claire McCaskill.

“The legacy you are establishing at Connecticut College in providing safe environments is crucial for current and future generations of students,” he said. 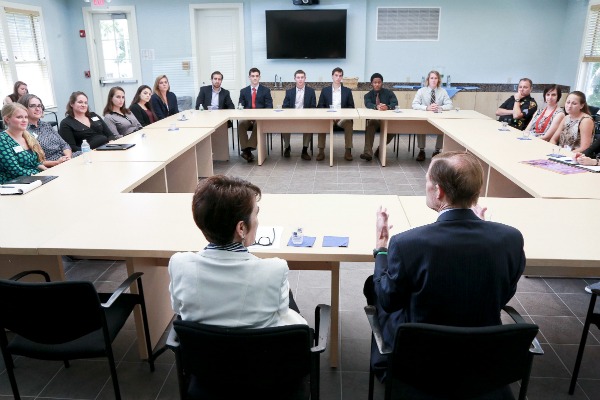