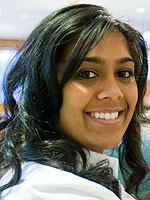 Summer 2010 - Research in the photonics lab of Professor Diagne, learning about the design and fabrication of semiconductors and the theory of PN-junctions and semiconductors as well as the light detection methods using photodiodes

Academic Year Research
During her freshman year, she assisted Professor Arlan Mantz in the physics lab, collecting data so he could generate pressure parameters at different temperatures. The project was supported by NASA to study methane at temperatures down to 79 Kelvin because methane is found in the atmosphere of Titan, one of Saturn's moons, and temperatures there are as low as 79 Kelvins.

Research Posters
Presented a poster at the end of Summer 2010 research internship on semiconductor theory.