Manganese oxides with microporous structures represent a broad class of synthetic and naturally occurring materials that are attracting considerable interest due to their potential in applications such as heterogeneous catalysis, toxic waste remediation, and rechargeable battery technology. They have approximate MnO2stoichiometry with layered and tunneled frameworks consisting of edge-shared MnO6 octahedral units.

Common examples microporous manganese oxides are shown below, which include layered birnessite and tunneled hollandite and todorokite materials. These are mixed-valent materials containing Mn(IV), Mn(III), and possibly Mn(II). Their frameworks therefore carry excess negative charge, which is counterbalanced by interstitial cations. Water molecules are also commonly found in the interlayer and tunnel voids.

We prepare Na-birnessite by a redox precipitation reaction between Mn(OH)2 and K2S2O8 in strong, aqueous NaOH. The Na cations readily undergo ion exchange with a variety of divalent cations to yield buserite, which has a similar structure to birnessite except that an additional layer of water resides between the manganese oxide sheets. As divalent cations replace Na cations, the concurrent uptake of extra water causes the interlayer spacing to increase from 7 to 10 angstroms. Hydrothermal treatment of buserite often yields tunneled manganese oxide phases. We have used this strategy to prepare todorokite with interstitial Mg(II), Co(II), Cu(II), and Ni(II). We have also synthesized a hollandite-type manganese oxide with interstitial Cr(III).

We can synthesize microporous manganese oxides using a sol-gel method that involves reduction of permanganate ion in either aqueous or methanol solution. Our approach is unconventional compared to classic sol-gel chemistry in which metal alkoxides undergo hydrolysis in aqueuos acid or base. Our initial studies were conducted in aqueous solutions with reactions between KMnO4 or NaMnO4 and various organic polyalcohols such as saccharides, ethylene glycol, and poly-vinylalcohol. Gels formed rapidly and exothermically to yield birnessite or cryptomelane after the gels were dried and calcined at 450 oC. We believe the gel forms due to cross-linking of manganese oxide sites by partially oxidized polyalcohol fragments. This matrix also contains alkali metal cations (from the KMnO4 or NaMnO4), which serve as templates for the resulting microporous structure.

More recently we have explored sol-gel reactions in non-aqueous solutions to determine if organic solvents are more amenable to processing the manganese oxides in different forms such as thin films and aerogels. We found that tetraalkylammonium permanganates, such as tetrabutyl- and tetraethylammonium permanganate (TBAMnO4 and TEAMnO4), react with MeOH to yield monolithic gels. If alkali metal cations are added to the reaction, then microporous products such as birnessite, cryptomelane, and spinel manganese oxide were obtained after gelation, drying, and calcination.

Manganese Oxide Bulk Sample. (above) Characterization of K-birnessite product after work-up and calcination of the gel. Powder X-ray diffraction pattern and SEM image of sub-micron-size particles.

Our non-aqueous sol-gel reaction can be used to prepare thin films of manganese oxide by spin coating. Interestingly, the only products observed with thin films are layered birnessite-type materials, whereas a variety of birnessite, cryptomelane, and spinel products were obtained by the same reactions in bulk syntheses. 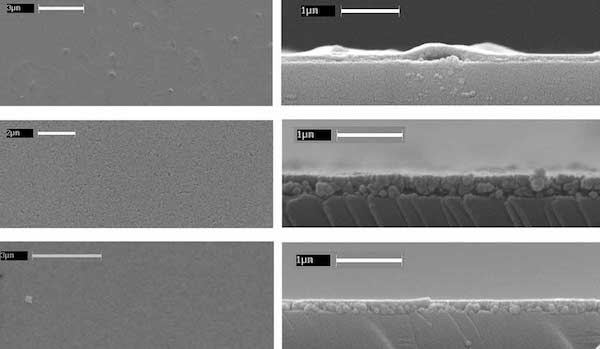 In our most recent research, we have been preparing nanostructured manganese oxides by reacting Mn(II) with permanganate in the presence of carboxylic acids. Our goal is to yield materials with high surface areas that may be useful as heterogeneous catalysts or battery cathodes. This work is inspired by the observation that molecular manganese oxide clusters of the type [Mn12O12(O2CR)16(H2O)4] can be synthesized under similar conditions. However, our reactions generate nanosized materials rather than molecular clusters. Thus far we have successfully obtained amorphous manganese oxides in the form of spheres comprised of aggregated nanosheets and hollow spheres with shells consisting of nanoplatelets. The surface areas of these materials are in excess of 200 m2/g. These materials can be isomorphously doped with transition metal ions of Fe, Cu, and V. The manganese oxides are active catalysts that can oxidize CO to CO2 at room temperature.

Nanostructured Manganese Oxides. SEM and TEM images of (Above) Spheres of aggregated nanosheets. (Below) Hollow spheres with shells consisting of nanosized platelets, including a broken shell.

We have also successfully prepared highly monodisperse manganese oxides nanospheres by reacting mixtures of permanganate with mixtures of butanol and either butryic acid or isobutyric acid. The synthesis occurs readily at room temperature and the spheres apparently form by self assembly.

This is earlier work from our group.

In previous research, we also investigated a new class of chemically modified electrodes having early transition metal complexes covalently bonded to the surface. These studies explored new systems with Lewis acid metal complexes attached to the electrodes. The modified surfaces were designed to activate molecules for electrocatalytic reactions. The chemistry required synthetic methods for handling highly air-sensitive compounds, such as inert atmosphere Schlenk line and glove box techniques. The modified electrodes were characterized by electrochemistry and surface analysis by Auger electron spectroscopy.