David Dorfman '81, who describes his Connecticut College education as “magic,” returned to the campus as an associate professor of dance in 2004 and was promoted to full professor in 2008.His company, David Dorfman Dance, considered one of the most influential American contemporary dance companies for the past two decades, was permanently named company-in-residence at the College in Fall 2007. 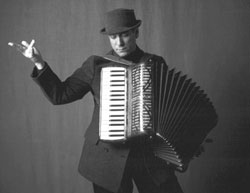 Dorfman, an internationally known dancer and choreographer who received his master’s degree in fine arts from Connecticut College in 1981, received a Guggenheim fellowship in 2005 to continue his research and choreography in the topics of power and powerlessness, including activism, dissidence and underground movements.

Dorfman has put his research into communicative practice through an evening-length dance/theater work titled "underground." The program, performed by David Dorfman Dance, had its New York City premiere at the Brooklyn Academy of Music’s Next Wave Festival in November 2006. 'underground' was performed at Connecticut College on October 28, 2006.

A native Chicagoan, Dorfman interviewed with Martha Myers, Henry B. Plant Professor Emeritus of Dance, in Milwaukee in 1979. She initially tried to dissuade him from pursuing a dance career, but later relented, and he entered the College that fall carrying a business degree. With not a step of dance experience, in two years he graduated with a master of fine arts degree in dance. Four years later, he founded his eponymous dance company.

Dorfman has been honored with four fellowships from the National Endowment for the Arts, three New York Foundation for the Arts fellowships, an American Choreographer’s Award, the first Paul Taylor Fellowship from The Yard, and a 1996 New York Dance & Performance Award (“Bessie”).

His choreography has been produced in New York City at venues ranging from the BAM Next Wave Festival to The Kitchen, The Joyce Theater, Dance Theater Workshop, Danspace Project/St. Mark’s Church, P.S. 122 and Dancing in the Streets. His work has been commissioned widely in the U.S. and in Europe, most recently by Bedlam Dance Company (London), d9 Dance Collective (Seattle), and the Prince Music Theater in Philadelphia for the musical Green Violin, for which he won a 2003 Barrymore Award for best choreography.