Associate Professor of French
Chair of the French Department

James Austin lectures frequently on Proust and on film in the United States and internationally. He is also an associate faculty member in the Film Studies program. 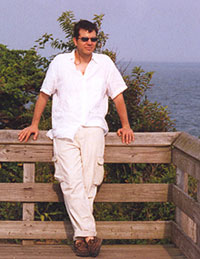 Austin came to Connecticut College in 2003. Prior to this he divided his time between New Haven, where he completed his graduate degree, and Paris, where he lived and studied for five years, and to which he returns often to take advantage of the city’s film archives and libraries.

His book, Proust, Pastiche, and the Postmodern, or, Why Style Matters (Bucknell University Press, 2013; paperback, 2015) http://www.amazon.com/Proust-Pastiche-Postmodern-Style-Matters/dp/1611486920/, traces the practice of pastiche in France from its early incarnations as a classroom exercise, to a performative textuality that retroactively created past writerly styles and that denounced and undermined coercive political rhetoric, to its place within postmodernism and the cinema. Currently, he is preparing a monograph on the films of Chris Marker.

Austin has written on the construction of French identity in the digital French heritage films of 2001, “Digitizing Frenchness in 2001: On a ‘Historic’ Moment in the French Cinema,” French Cultural Studies, 15 (3), October 2004: 281-299. He has worked on the banlieue film genre, contributing the article "Destroying the Banlieue: Reconfigurations of Suburban Space in French Film" to a special issue of Yale French Studies, New Spaces for French and Francophone Cinema (YFS 115, 2009), of which he was also the editor.

Professor Austin’s classes at Connecticut College include: Cities on the Screen: Constructing Urban Space in the Cinema (in English); Espaces Urbains: La ville au cinéma (in French); New Wave Film: Then and Now; History / Story: On the Grand and the Intimate in French Cinema; and Historicizing France: Politics, Culture, Literature.