Joseph Alchermes' main research interests range from the Roman and Early Christian world to the art and architecture of the Byzantine Empire with links to western Europe. He teaches a comparably broad array of courses, from the survey of ancient and medieval art to specialized investigations of Roman, eastern and western medieval, and Islamic art and architecture. 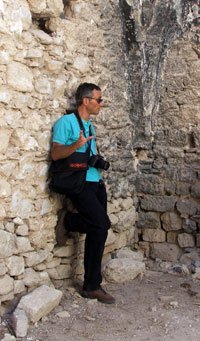 His most recent offering of Art History 260: Medieval Architecture featured a ten-day study tour of Tuscany and Rome (as one of the College’s TRIP programs) during which students tracked the last several hundred miles, some on foot, of the Via Francigena, the main medieval pilgrimage route to Rome.

His most recent publications are Anathemata Eortika: Studies in Honor of Thomas F. Mathews, edited by Joseph D. Alchermes, with assistance from Helen C. Evans and Thelma K. Thomas (Mainz 2009), a collection of 39 essays covering a wide range of medieval art-historical, historical and literary topics, and "Architectural Survey and 3-D Reconstruction of the Cistercian Abbey of Zaraka in Ancient Stymphalia: 2007 Study Season," Mouseion: Journal of the Classical Association of Canada 8 (2008), a report written with Kostis Kourelis and Anthony Masinton on field work conducted in 2007 with the assistance of Connecticut College students Elizabeth Mandel '09, and Erin Okabe-Jawdat '10.

He has also published articles and book chapters on such diverse topics as art and architecture in the age of the Emperor Justinian, the urban scheme of medieval Constantinople, architectural reuse in Late Roman cities, settlements and land use in medieval Greece, and an essay and numerous entries in "The Glory of Byzantium," the catalogue of a major exhibition held at The Metropolitan Museum of Art.

Current projects include a book on ancient Naples and archaeological field work at several sites in southwestern mainland Greece.