Professor of Economics
Chair of the Economics Department

Purba Mukerji's research covers the areas of international finance and international trade, with a focus on issues facing developing countries in their decision to liberalize policies in order to gain closer integration with the global economy. 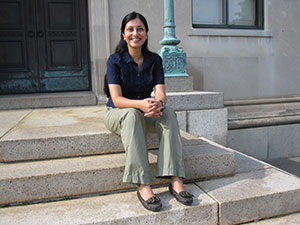 These issues are very different than those facing developed countries. Simply copying developed countries' policies in hopes that they will bring similar prosperity to low-income countries is therefore often a fundamentally wrong strategy. However, this strategy is often pursued and developing countries suffer tremendously as a result. The aim of this research is to draw on international experience of nations in various stages of development to glean the best sequencing of economic reform policies to maximize the benefit to the nation while minimizing disruption and cost.

She has published her work in several journals including the Journal of International Money and Finance, Scottish Journal of Political Economy, Open Economies Review and Papers in Regional Science and in newspapers such as the Economic Times.

She was invited to research the developing country perspective on the global investment into natural resources by the Energy Research Institute in India in 2007. She was awarded the Jesuit Foundation Grant at San Francisco for 2008-09 for her work on the negotiations under the World Trade Organization and the Cairncross Award of the Scottish Economic Society for best research paper of 2008. In 2013 she was awarded the Maude R. Hickey Outstanding Teacher in Economics Prize.

She is a member of the search committee for selecting the new President of Connecticut College. She also serves on the Board of Directors and the Advisory Council of the non-profit Richmond Area Multi Services.