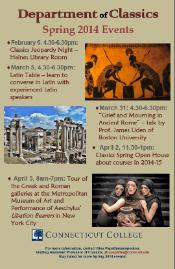 For up-to-date information and final details on classics department lectures and activities and all College events, please consult the Online Calendar of Events.

March 5: Latin Table and Discussion about Graduate School. Students learnrf how to converse in Latin with the help of two graduate students from Columbia University who have experience in Latin speaking tables.

April 5: Tour of the Greek and Roman galleries at the Metropolitan Museum in New York City, followed by a Theater Performance of Aeschylus' Libation Bearers. Professors Alchermes, Myers, Papathanasopoulou and Beasley  accompanied the tour. 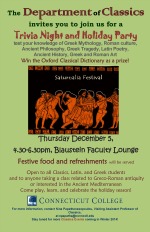 The Department of Classics held a Classics Trivia Night followed by a holiday party on Thurs., Dec. 5, at Blaustein Faculty Lounge. Pizza, holiday cupcakes and other festive treats were served. Questions for jeopardy were drawn from the following categories: mythology, Greek and Roman history culture, Greek and Latin literature, Greek and Roman art and architecture. Upon arrival students were divided into teams; game ran from 4.45-5.30 pm and two winners got a copy of the abridged Oxford Classical Dictionary as a prize! 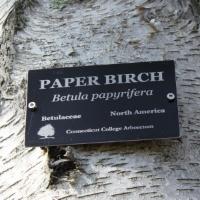 Trees and flowers in Latin, an early October Arboretum tour

Latin names for plants can seem a bit daunting at first. Did you know that there is a tree whose Latin name means lyre-shaped leaf and tulip flowers?

Knowledge of the botanical name is a valuable tool for gardeners and plant lovers at all levels. This hands-on workshop took some of the mystery out of using the language of science to name and describe plants.

The department of classics sponsored an early October tour of the Connecticut College Arboretum (see photo above), a hands-on workshop with Jo-Anne Crystoff. Starting with a quick history of botanical language, the group began making connections between Latin names and the trees and shrubs on the campus. Hand-outs were provided.

The department is planning another Latin Arboretum tour in the spring when trees and plants are blooming. 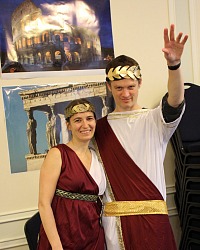 ‌The department of classics welcomed more than 60 students, faculty and staff to a Halloween Open House on Oct. 31 to learn about courses, ask questions and meet the classics faculty.

Pizza and chocolate were served to the visitors who learned about course offerings on the world of Ancient Greece and Rome, Greek and Latin, the tragedies of Euripides, Aristophanes’ comedies, the epic poetry of Vergil, ancient magic, gladiators, and gender and sexuality in the ancient world.‌