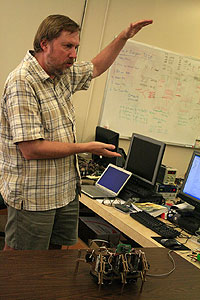 Gary Parker's research focuses on methodologies for learning in autonomous agents. Currently he is concentrating on evolutionary robotics, where he is applying evolutionary computation to generate control programs for legged robots, and video game agent learning, where he uses Xpilot-AI as a test environment for evolving control programs.

He developed the cyclic genetic algorithm (CGA), which is a variant of the standard GA, to provide a means for learning cycles of behavior. CGAs have been tested on three different levels of control complexity (individual leg cycles, gaits, and search cycles). In addition, he developed punctuated anytime learning (PAL), which he is using to incorporate CGAs into a real-time learning system that uses periodic tests on the robot to continually improve the quality of controller learning. This new way of integrating the actual robot with its simulation during evolutionary computation allows the system to make adjustments to the onboard controller while learning is carried out off line, giving the robot the capability to adapt to changes in real time. Additional research has resulted in a method using PAL and sampling to co-evolve cooperative individuals in a team of robots. He also led the creation of Xpilot-AI, a system based on Xpilot (an open-source 2D multiplayer space combat game, playable over the internet) that was developed as a test-bed for agent control learning methods.

Gary Parker was the 2014 recipient of the Nancy Batson Nisbet Rash award, an honor that provides a research fund presented annually to a member of the faculty for outstanding scholarly or artistic accomplishments.

Professor Parker was presented with the World Automation Congress / AutoSoft Lifetime Achievement Award in October 2008. He has over 80 peer-reviewed publications, including conference papers (two of which received best paper awards), journal articles, and book chapters. He was the chair of the 7th and 8th International Symposium on Intelligent Automation and Control (ISIAC2008 and ISIAC2010); has been on the program committee / reviewer for over 50 conferences; served as a reviewer for 17 journals; has been on the board of associate editors for the IEEE Systems Journal and AutoSoft, the International Journal on Intelligent Automation and Soft Computing; and is a member of three IEEE Computational Intelligence Society task forces. His papers and professional activities can be viewed on his personal homepage, http://cs.conncoll.edu/parker/