Orientalism in the Hispanic tradition

Julia Kushigian puts the liberal arts into action in her courses. She encourages a rigorous and interdisciplinary development of critical skills and individual expression in her students. From her authorship of a computer-based History of Hispanic Art course, to upper level sequences in Myth, Folklore and Legends, Foreign Language Methodology and Second Language Acquisition, and Postcolonial Coming-of-Age Narratives, she promotes an inquiry into the complexities of postmodern life. 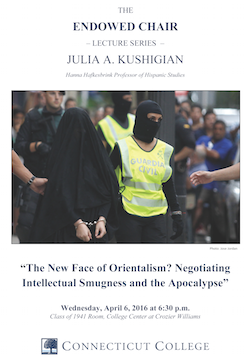 Through an analysis of problems regarding social justice, environmental justice and "Othering," her approach is to intentionally bridge analytical, problem-solving skills, with the robust, flexibility of the liberal arts tradition.

A sampling of her courses:

"The Dislocation of the City: Ecofeminist Literary Traces of the Urbanization of Poverty," LASA, Chicago, 2014

A sampling of her most recent publications:

Professor Kushigian has held the following service and leadership positions at Connecticut College:

"In a traditional reading of the novel of growth and development - or Bildungsroman - a white, male, middle-class individual emerges as protagonist. Kushigian's bold, interdisciplinary study offers new approaches to the Bildungsroman and ably demonstrates that its design is anything but monolithic. Expanding the definition beyond the limitations imposed by the traditional form, Kushigian (Connecticut College) brings to the discussion the experiences of women, the marginalized, and the disenfranchised. Two premises underscore her analysis: The individual identity often appears problematic and inextricably intertwined with national and cultural identity, and that the path to self-knowledge leads to engagement with the Other. The novel of self-realization and actualization thus becomes a type of hero journey marked by an exploration of gender roles and socioeconomic difference. Kushigian examines myriad cultural components present in both canonical and less-studied texts and employs four basic reading strategies: the standard view of Bildungsroman as rite of passage, new models of wholeness or self-actualization, a redefinition of the concept of the heroic, and ambiguity and hybridization of identity through parody and pastiche. Including ample documentation and bibliography, this major study will change the way scholars view the coming-of-age novel." -- Choice

"You may be interested to know that I am currently doing an internship at the Association for Moroccan Immigrants and Workers in Spain. I have the opportunity to do a study on the integration of the Moroccan immigrant woman into Sevilla society, so all that I learned from you about Orientalism and perceptions of the East/West is coming in handy as I do my research!" - Erin Holstein ’09, Accepted into the MA program in Human Rights, London School of Economics, beginning fall 2011.

“I just wanted to say thanks for everything this semester. I've been in Guatemala for a medical mission for a few days now and I've been able to communicate really well with the people here. Just figured I'd tell you how applicable Spanish 103 has been in real life training.” Gracias, Adem Abrham, 5/20/12, Spa 103: History of Hispanic Art.