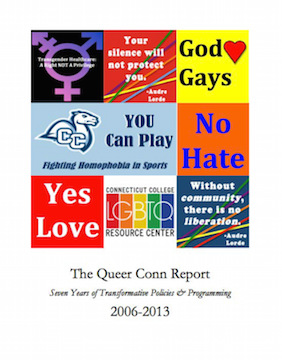 The Power of the Past | Thirty Years of Student Activism

The Power of the Past

The widespread ignorance about the history and diversity of LGBTQ people stands as the single most significant obstacle to our freedom, justice, and equality. While antigay right wing forces actively work to suppress such information, even those who support and defend the dignity of LGBTQ people, even liberals, fall prey to this insidious form of homophobia.

But there are many resources available now for people who want to learn. Book length studies documenting the history of LGBTQ people and communities now number in the dozens and are widely available. The gay community took it upon ourselves to preserve our past, establishing historical archives around the country, with major collections in New York, Philadelphia, San Francisco, and Los Angeles.

The Queer Conn History Project was a collaboration initiated in Spring 2010 by two seniors: Lakshimi Kannan and Rachel Zelinsky. Each had a different goal for the project: Zelinksy wanted to document the history of LGBTQ student activism at Conn; Kannan wanted to explore the contradictions of multicultural and diversity initiatives on college campuses. Both Kannan and Zelinsky worked tireless on behalf of the LGBTQ community their four years at Conn. Kannan was also active with the Women’s Center and CCASA. Zelinsky held leadership positions in Spectrum and CQ2 for years.

The final project was installed in the LGBTQ Center in May 2010 and remains to this day. Much can be learned by browsing the documents on display. The first wall provides national context, highlighting important documents from the early years of Gay Liberation and Lesbian Feminism. The second wall documents the thirty-year history of student activism beginning in 1979. The third wall captures the energy and challenges that marked the founding of the LGBTQ Center in 2007.

Here, we have reprinted the reflections that each of the students wrote as part of the process. They are full of important insights – and community history. Interesting excerpts from the project follow their reflections.

I do not like taking credit for this project because it was built on the work of many others. Most of the documents were provided by two alumni, Carrie Hackett ’05 and Chris Fray ’86. The inspiration came from stories I was told my freshman year at Conn. The activists in the senior class emphasized the history of their struggles to create LGBTQ community. They talked about the unwelcoming basement spaces they met in as underclassmen and the frequency of bias incidents in the past. They graduated in May 2007, soon after the opening of the center. While they never got to experience the College as a place where students could comfortably be “Out,” the following year’s freshman class arrived with an established Resource Center, lots of programming, and an apparently supportive administration. Each subsequent year, the incoming class has less knowledge of and connection to the students who fought for years against a hostile student body and unsupportive administration. My friends in the class of 2007 had a really hard time being “Out” at Conn; I feel that it negates their experiences and almost insults them when people assume that this campus has always been a safe and supportive place.

This project stemmed from my desire to document the history of the founding of the LGBTQ Center before my class graduated. We were first year students in 2006-2007 when the Center opened and many of us hold the institutional memory of this period. I ended up expanded this project far beyond the scope of the LGBTQ Center to a study of queer activism at Conn over the past 30 years. Some of the findings were predictable, while others debunked my assumptions about the past. Historical narratives of marginalized groups often emphasize and promote the notion of progress towards ever increasing equality and social justice. People assume that Conn has become more gay friendly from year to year, but this has proved to be blatantly untrue. I was shocked to see that the campus seemed to have a more supportive community in 1999 than in 2005. As students graduate and administrators change, the campus climate changes, for better and worse.

By the time I arrived at Conn, the late 1990s had all but disappeared from the memory of the student body; if there had once been a more supportive administration, no one knew about them. Knowledge of institutional activism often rests in the minds and files of supportive faculty and staff, but this information is so rarely shared with students. Good historical record-keeping of our own activism is the only way for students to continue a project after the founding activists have graduated.

By researching the history of queer activism at Conn, I have recognized the incredible importance of the LGBTQ Center in building a community and preserving its history. Carrie Hackett ’05 visited campus a number of times when I was a freshman. I knew her as a dedicated activist who sacrificed years of sleep and good grades for her work with SOUL. She compiled the first collection of newspaper clippings and event advertisements, informing me that she was prompted to do so after Physical Plant threw out two boxes of their documents. Our own documentation of our history was literally thrown out by the College. The College Archives has virtually no records of LGBTQ life, people, community, or activism. When I tried to do research in the College Archives, I found one small folder with four documents from the late 1970s and early 1980s. We have no idea how many other students went to the archives to research Conn’s queer past and were disappointed. We also don’t know how many other students compiled records of their own or past activism (like Carrie and Chris did, thankfully) and we don’t know how much was lost. Although students should not carry the responsibility for documenting our history (and we can only hope this exhibit will inspire the College to actively document queer life and preserve what records still exist), the LGBTQ Resource Center at the very least provides space to collect and store documents that might otherwise be lost.

As I collect documents that illustrate our past activism, it is becoming increasingly clear how much things have changed, in both positive and negative ways. LGBTQ students at Conn seem happier and more comfortable than ever before, but our community is more divided and less outspoken than it once was. LGBTQ activists at various points in the last thirty years worked in close conjunction with Unity House and students of color to make the campus more inclusive for everyone. White lesbian, gay, and bisexual students actually locked themselves inside Fanning Hall with students of color in 1986 during the Fanning Takeover, and students of color stood with LGBTQ students in protest of bias incidents in 2003 and 2004. Aside from periodic movie nights, how much do current student activists work across identity lines? How often do current students make demands? Have the suggestions in the 1997 Task Force on Sexual Orientation and Campus Climate been met yet? After looking at past campus activism, I regret not taking more of a stance on issues I care about. No one, myself included, has protested very loudly that we don’t have a queer studies major or minor. We still don’t have gender-neutral bathrooms in public buildings. I challenge you to look over the activism of the last thirty years and be inspired to carry on the work of these brave student activists, to make demands and to continue making change.