Barkley Hendricks leaves a retrospective of alumni portraits as he retires. 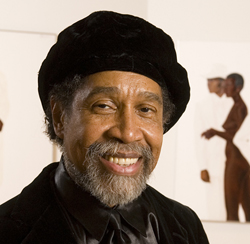 Where would artists be without the models who pose for them?

That's a point that Professor Barkley L. Hendricks always makes with his students.

After talking with Estella Johnson '75 -- one of his own models, an alumna, and a College trustee  -- Hendricks suggested that CC:Connecticut College Magazine feature the portraits of students who have posed for him over the years.

It's "one way to say thank you for the memories, inspiration and respect they created," says Hendricks, who is retiring after 38 years on the faculty.

View Hendricks' portraits and other online features from the new issue of the magazine.

Professor Maria Cruz-Saco joins The Day’s board of directors