The roundtable brought together law enforcement officers, prosecutors and representatives from several colleges and universities across the country to discuss challenges and best practices with lawmakers.

Folsom spoke about the value of building a campus culture where people are constantly talking about sexual assault prevention.

“It takes time. It’s not an overnight process, but it’s doable,” she said.

Folsom was invited to participate in the discussion by U.S. Sen. Claire McCaskill at the recommendation of U.S. Sen. Richard Blumenthal, who was impressed with Connecticut College’s proactive approach to sexual assault prevention when he visited campus in April. He was on campus to discuss the issue with President Katherine Bergeron, students, faculty, staff and guests from the Coast Guard Academy, Safe Futures and Connecticut Sexual Assault Crisis Services (CONNSACS).

“You ought to be very proud of this college for what it has done and the frankness and courage it has shown in addressing this very sensitive and difficult issue,” Blumenthal said at the time of his visit. 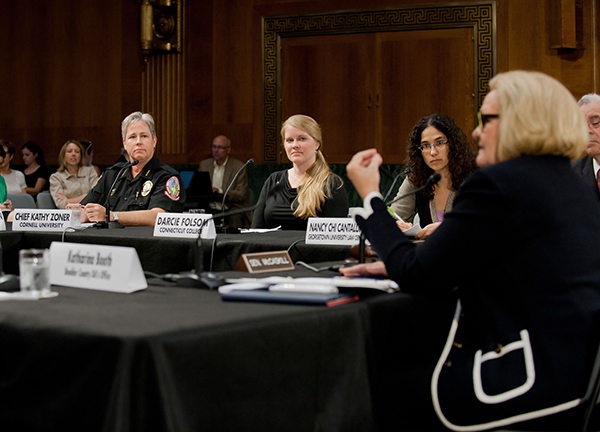 On Tuesday, Folsom continued the discussion on The Joe Madison Show on Sirius XM Radio. Listen to the interview by clicking the "play" icon below.

Wishing you a joyous and light-filled 2023