The Connecticut College art department and the adjacent Lyman Allyn Art Museum have teamed up for a provocative exhibit exploring how faculty members conceptualize and create their work – and how teaching influences them.

“Transmissions: Teaching and Learning in the Studio,” which runs through June 7, includes paintings, photographs, sculpture and video, all with a brief statement by the professor explaining his or her focus and philosophy, and often a comment on how the viewer might approach the piece.

“The show looks at art as an ongoing cycle of teaching, learning and exploring. It exemplifies the idea that creativity really is a process and not an end result,” said Jane LeGrow, registrar and assistant curator at the museum.

Viewers will be intrigued by the variety and range of the artists’ work, and by the freshness of their perspectives, she said.

The artists’ statements reveal how current social and political issues, philosophical musings and everyday concerns can influence an artist – and how teaching fosters new and shifting creative expression.

“It is a dynamic that flows both ways, from teacher to student and back,” the artists said in a collective statement. “Fresh viewpoints, new questions and surprising answers are the energizing results of the teaching/studio relationship.”

Rebecca Marsie, visitor engagement and communications coordinator, said many visitors are excited to see such contemporary pieces of art at the museum. “Through ‘Transmissions,’ a new audience is drawn to the museum,” she said. “People are visiting who may not otherwise have thought to come to the Lyman Allyn Art Museum.” 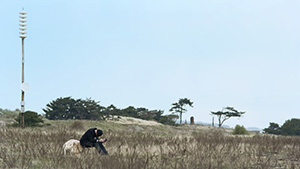 Assor explores technology as an essential and transformative human condition. Most recently he has been working with unmanned drones.

“This is a new transformative vehicle for surveillance and mobility that strangely seems to resonate with a lot of old desires,” he says, “such as the ability to achieve an out-of-body experience.”

This installation features a video of Jake Wells, a do-it-yourself drone builder and possibly the world’s first Remote Control (RC) Christian Minister. While flying, crashing and repairing his homemade drone in the Pacific Northwest, Wells recounts the story of his techno-spiritual liberation from a life in which he felt remotely controlled by other forces, to one in which he builds and controls his own machines – machines that serve as vehicles for his eternal soul.

Bailey’s artwork in this exhibit draws parallels between the vulnerability of plant and animal life and the folly of human existence. We are experiencing the sixth extinction, he says, and it is our fault. “‘Not in your lifetime, dear,’ will not comfort my daughter because it is happening now,” Bailey says.

His pieces are designed to make a home more energy efficient, safe and comfortable. The works include improvised armor – a visual reminder that unconscious defense mechanisms conflict with reality. And his heat exchangers remind the viewer that humans are comfortable naked at a temperature of 72-84 degrees Fahrenheit. 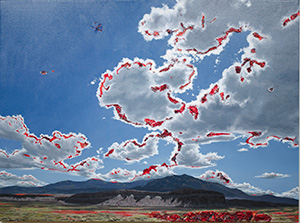 Barnard’s works focus on the relationship between romantic representations of the “American” landscape and the ideologies that have long fueled U.S. imperialism and violence. His paintings engage questions of light and dark, truth and fiction, substance and surface, reality and mythology.

“I evoke the expansiveness and atmosphere of 19th-century works, but I work to undermine that romanticism by layering images and materials,” he says. For example, he reframes heavenly light and the color white as forces of darkness and portents of sorrow.

“I hope viewers wonder what they are looking at – whether projected over, breaking through, covered up or emerging from behind – and why.”

Joined Connecticut College: 1989
Forms of expression: photography
Specialty: the nature of landscape, from man-made to natural

For Hendrickson, landscape is a subtle depository for the evidence of great swaths of time. It stretches the mind into both human and geologic frames of reference. Photographs, for him, act like time machines, opening the past to the present and implying an as yet unseen future.

Barely hidden in the woods from passing cars and encroaching suburbs, the propped-up boulders, cairns, chambers and walls he photographs combine to form time’s trace, at once familiar and strange. Who built them? When and why?

"I see my work as part of a conversation, looking for insight both logically and intuitively,” he says. “Hollis Frampton pointed out that photography is an incision in history. In this case, I think, it’s one that creates free passage for an open mind to enter.” 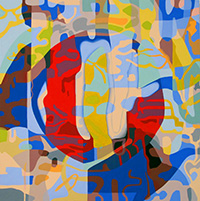 Marks' paintings are a cross-pollination of the digital and the handmade. She combines digital images of her paintings using video transitions. This process creates surprising new colors and organic forms. She then translates the digitally captured compositions back into paint.

“Central to the work is seeing the earth – nature – in constant flux and dissolution, whether by human intervention or natural processes,” she says. Marks uses layered transparencies and organic patterns disrupted by geometry to suggest this complexity. Color shifts and optical movements reinforce the perception that the world is in motion.

"I am striving for a physical, palpable experience for the viewer that embraces a tactile awareness of the world around us," says Marks. 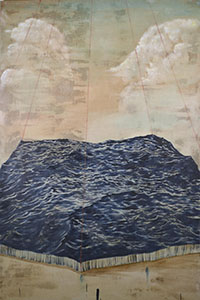 McDowell uses items from nature – from insects and birds to flowers and landscapes – as a catalyst for the viewer to consider how memory becomes frozen and fixed into nostalgia.

His paintings unify these varied elements, illustrating the intricate and fragile interconnectedness of the natural world. Nature is at omnipresent but also ephemeral. McDowell explores the bittersweet implications of that paradox. 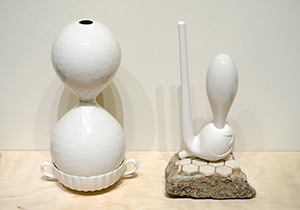 Pelletier is interested in “objects that exist at the margins of the human body and the exterior world … where things shed, leak, break down and renew.” Material experiments in clay, with its ability to record human touch or to replicate surfaces, is the starting point for most of her work.

“Prototypes For An Uncertain Exchange,” on display at the Lyman Allyn, is inspired by images of 16th and 17th alchemical forms and pre-enlightenment Flemish paintings of domestic interiors. Pelletier’s oddly familiar — but not quite nameable — objects are shown as “still lives” that play with ideas of function and symbolism. “Swelling bellies and delicate, meaty surfaces coalesce to revivify these forms,” she says, “while computer-aided design and hand-pressed clay alternates in a feedback loop of mutable relations.”

Pictured: "Prototype For An Uncertain Exchange," 2015 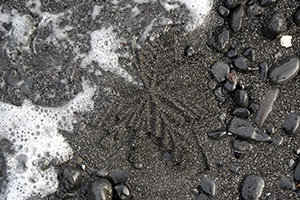 Wollensak investigates a myriad of socio-cultural and technological relations to place and memory. She combines new media technology and traditional design and fabrication to explore the convergence of place, identity, and history through site-based artwork.

Specific themes in her work include community, environment, surveillance and memory, which she adapts to a range of artistic forms including audio/video and interactive installations, data visualization, and 3-D printed forms.

The works on view are from a larger body of work titled “Between Solid and Liquid: Constructed Landscapes.” That body of work was developed during multiple visits to Iceland, and was based on site visits, material gathering and extended interviews with residents, describing their place-based memories against the backdrop of the fundamentally dynamic and ever evolving environmental and political landscape.

Arts and tech collide at CONTACT: The Ammerman Center Symposium