YouTube has posted a large collection of videos that illustrate various issues related to athletics and sports safety.

Lightning is the most consistent and significant weather hazard that athletes encounter. According to the National Severe Storms Laboratory (NSSL), there are approximately 100 fatalities and between 400 and 500 injuries resulting from lightning strikes each year in the United States. Even though the probability of being struck is extremely low, the danger increases when a storm is in the area and proper safety precautions are not followed.

The National Collegiate Athletic Association (NCAA) has developed guidelines for lightning safety. The following Connecticut College procedures are based on those guidelines, and should be followed whenever there is a risk of lightning.

Individuals suffer heat-related illness when their bodies are unable to compensate and properly cool themselves. The body normally cools itself by sweating. But under some conditions, sweating just isn't enough. In such cases, a person's body temperature rises rapidly. Very high body temperatures may damage the brain or other vital organs. Under conditions of high heat and humidity, even well-conditioned athletes are at risk of heat-related illness:

It's important to know both the temperature and humidity when performing strenuous activities. The greater the humidity, the more difficult it is for the body to cool itself. Coaches and trainers should check the Heat Index Map at http://www.weather.com to determine the recommended duration of strenuous athletic activity before resting. Below is a chart from the National Weather Service that illustrates the relationship between temperature and humidity as it relates to heat illnesses: 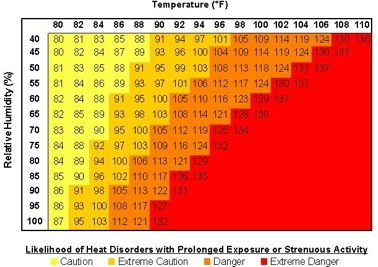 MRSA is a type of infection caused by Staph bacteria that is resistant to some common antibiotics such as penicillin. While most cases have involved athletes, cases involving non-athletes have also occurred. Skin infections such as abscesses and boils are the most common form of this infection. The infected area usually starts out as a small bump resembling a pimple, which becomes redder and often develops pus drainage. Staphylococcus bacteria (or Staph) are commonly carried on the skin or in the nose of healthy individuals. Staph and MRSA are spread by close contact either through direct physical contact with an infected individual or by touching objects (e.g. towels, sheets, wound dressings, clothes, or sports equipment) contaminated with the bacteria.

In most cases, MRSA infections are mild and can be treated successfully with proper hygiene and the appropriate antibiotics. If left untreated, MRSA can progress to a life threatening infection and become difficult to treat because there are fewer effective antibiotics available at this stage of the illness.

Here are a few guidelines to help prevent and control the spread of MRSA:

More information regarding MRSA is available on the CDC’s website at: http://www.cdc.gov/ncidod/dhqp/ar_MRSA_AthletesFAQ.html