View the Arboretum's YouTube Channel for a glimpse at historical videos.

The Connecticut Arboretum was established in 1931 on 64 acres of land owned by Connecticut College on the west side of Williams Street, south of Gallows Lane. The initial tracts included a grove of mature hemlock trees, one of the main features of interest in the Arboretum's early years.

The remainder of the original property was laced with stone walls that testified to over two hundred years of agricultural use. What eventually became the Native Plant Collection and Bolleswood Natural Area was comprised of rocky ledges, red maple swamps and brushy fields. 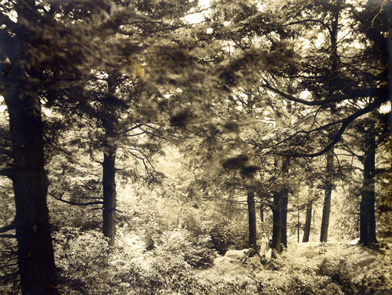 Dr. Caroline Black, first chair of the botany department, created a small teaching garden in 1928 across Mohegan Avenue (known today as CT Route 32) from the College's main entrance. The four-acre plot was named the Caroline Black Garden after her untimely death in 1930, and still flourishes today.

In early 1931, the College engaged the landscape architect A. F. Brinckerhoff of New York City to design a plan for the Arboretum and hired Dr. George S. Avery, Jr. as chairman of the botany department and first director of the Arboretum. Dr. Avery oversaw the development of the Native Plant Collection College greenhouses and began membership and educational programs, such as the Arboretum Bulletin series, that are still very active today.

When George Avery left to become the director of the Brooklyn Botanical Garden in NY in 1944, Dr. Richard H. Goodwin took over the Arboretum and the botany department. While continuing to develop the Native Plant Collection, Dr. Goodwin's true passion was land conservation. During his time at the College, the Arboretum grew from about 100 acres to 450 acres surrounding the campus to the west, north and northeast. 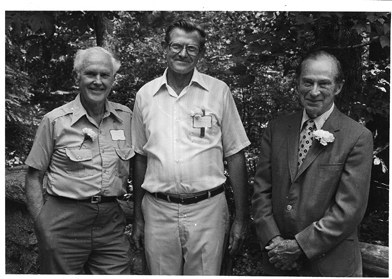 In 1952 the College's Board of Trustees designated the Bolleswood Natural Area for the express purpose of establishing long-term ecological studies. Vegetation surveys began in that year on the 75-acre natural area located west of the Arboretum Pond and south of Gallows Lane. In 1953, Dr. Goodwin hired the young plant ecologist Dr. William A. Niering to teach in the botany department, to be his assistant director and to supervise ecological research in the Arboretum.

Dr. Niering became Arboretum director in 1965, by which time the Arboretum had served generations of students and faculty as a living laboratory and cherished recreation area. As environmental consciousness in the United States began to blossom through the turbulent 1960s, Goodwin and Niering led efforts to preserve natural areas and to protect tidal and freshwater wetlands.

In 1969, the College established the human ecology program and major, which was later renamed environmental studies. Since its inception, the program has been led by a member of the botany department, beginning with Richard Goodwin and including Professors Niering, Sally Taylor and Peter Siver.

Extensive ecological research by faculty and students in the botany and zoology (now biology) departments became the academic hallmark of the Arboretum, resulting in an impressive body of publications.

The Outdoor Theater in 1934

In 1988, Assistant Director Glenn Dreyer became the administrative director of the Arboretum and William Niering the research director. One of Mr. Dreyer's his first acts was to change the name from the Connecticut Arboretum to the Connecticut College Arboretum to clarify that the College owned and operated the land and the department that oversaw it. He also helped to formally articulate the institutional mission. Mr. Dreyer strove to further develop the plant collection and public education aspects while helping Dr. Niering facilitate academic uses.

In 1996, a campus planning effort designated all 750 acres of Connecticut College property as part of the Arboretum. For 55 years the Arboretum had been "out there" and not a part of the main campus. Now the Arboretum had the added responsibility of developing and interpreting the main College campus landscape as the third major plant collection. While the Physical Plant grounds crew continued to maintain the campus landscape, the Arboretum inventoried, accessioned, mapped the campus trees and shrubs, trained volunteers to lead tours, labeled, developed interpretive materials and consulted on additions of plants and gardens. 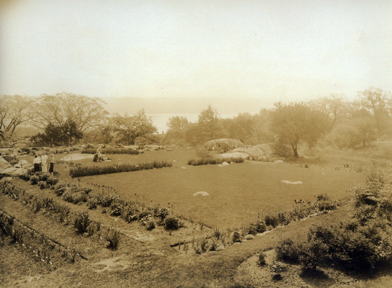 The Caroline Black Garden in the 1930s

A comprehensive Campus Master Plan process in 1999 reaffirmed the central role of the Arboretum concept in the future development of the Connecticut College campus.

The addition of a full-time assistant director for public programs in the late 1990s, and a part time curator, in 2004, greatly increased the public education and collection management aspects of the Arboretum.

For much greater detail on the development and history of the Arboretum, please see Arboretum Bulletin No. 28 and Bulletin No. 32 and Arboretum Annual Reports. -Glenn Dreyer, Charles and Sarah P. Becker '27 Arboretum Director

You can now also take a virtual tour of the Arboretum's history from its inception in 1931 to present day! With historic photographs, correspondence, maps and documents sourced from Linda Lear Center for Special Collections and Archives, “The Arboretum at Connecticut College, 1931 to 2014” traces Katharine Blunt’s plan to turn a few acres of windswept hill into the enduring reflection of the College’s commitment to environmental education, preservation, research and conservancy we know today.