One of the most beautiful and popular places in the Arboretum

The Edgerton and Stengel Wildflower Garden is filled with wildflowers, ferns and a shrub layer of native azaleas and rhododendrons. Sheltered by a canopy of white ash and red maple, this naturalistic garden displays its beauty on a west-facing slope. The remains of stone walls are reminders of the original agricultural use of the land. Wildflowers are able to survive without the intervention of people and they add to the natural beauty of any setting. One of the best times to visit is late May when the flowers are in bloom. Come by for a tour in the spring!

History of the wildflower garden 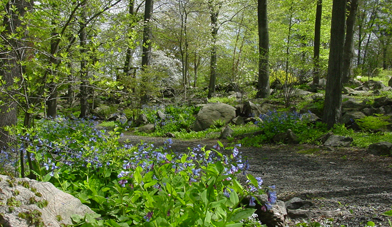 The wildflower garden was created in 1956 as a memorial to Mrs. Malcolm J. Edgerton, who had been a respected member of the Arboretum Advisory Committee and the Federated Garden Clubs of Connecticut. The actual design of the garden was created by John Stengel, arboretum horticulturist, Dr. Richard H. Goodwin, arboretum director and Dr. William A. Niering, professor of botany. The informal two-acre plot was extended to the south in the late 1960s and 1970s, and in 1976 this new portion was dedicated to John Stengel who had been an integral part of the success of the arboretum during his twenty years as horticulturist.

The garden was later renovated in 1995 and 1996. Dr. Niering, Glenn D. Dreyer, arboretum director, and Jeffrey D. Smith, arboretum horticulturist, formed a team to oversee the renovation. They were later assisted by David Longland, a designer and horticulturist, Art Manthorn of Woodstock Wildflower Nursery and Jack Deering, construction planner.

The renovated garden features native eastern woodland wildflowers with a simplified, more accessible path system. The rocky slope creates a unique appeal with ranges of moisture and sunlight to allow a diversity of wildflower colors and textures.