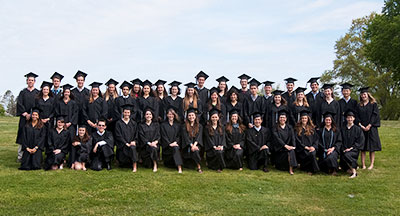 Phi Beta Kappa, Delta of Connecticut, takes as its charge to new members the words spoken by Charles Evans Hughes, Chief Justice of the United States Supreme Court, at the 100th anniversary celebration of the Alpha Chapter of Rhode Island. Justice Hughes said:

The Delta of Connecticut Chapter of the Phi Beta Kappa Society was installed at Connecticut College on February 13, 1935. At that time, the faculty voted to retain the designation of Winthrop Scholar as its highest honor, reserved for students elected to Phi Beta Kappa in the fall term of their senior year. It was in May 1928 that Connecticut College had instituted the practice of honoring as "Winthrop Scholars" those members of the senior class who demonstrated exceptional scholarship.

Winthrop Scholars are named for John Winthrop the Younger (1606-1676) who founded the city of New London and served as governor of Connecticut. He was a remarkable scholar, one of the most learned and versatile men in New England. On his first trip to the New World, despite crowded shipboard conditions, he brought two hogsheads of books, which were to become the nucleus of one of the finest libraries in the colonies. As a scientist he was an international figure and one of the earliest members of the Royal Society of London. As an astronomer he made his own telescope, one of the few telescopes in the New World. He is credited with having discovered the fifth satellite of Jupiter some two hundred years before it was rediscovered with the aid of the great Lick telescope.