Devlin frequently writes about issues in evidence-based design. She also specializes in way-finding, the study of the manner in which environments (through their design and layout) and designers (through their creation of maps and other tools) provide cues to help people navigate from an origin to a destination.

Recently she and collaborators in Portugal received a grant from the Academy of Architecture for Health Foundation (AAHF) to do cross-cultural research examining inpatient hospital rooms and patients' levels of stress and well-being. 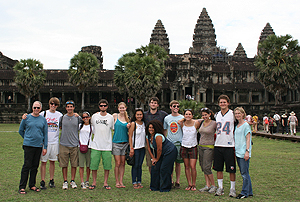 Devlin, a former Woodrow Wilson Fellow, is the recipient of several Mellon Foundation grants. She received the Mellon Initiative on Multiculturalism (MIMIC) grant as well as a grant to develop the Freshman Focus Cluster, an integrative, writing-intensive program for incoming first-year students at Connecticut College.

Her latest book, The Research Experience: Planning, Conducting and Reporting Research (Sage, 2017), presents a process-oriented approach to research for students in the behavioral sciences. In-depth, practical advice for conducting each step of the research process includes coverage of the most common research methods and current technologies—including Qualtrics, Google Scholar, and Amazon Mechanical Turk—as well as techniques for finding participants and collecting data in a variety of settings.

Her book from Routledge (2015) titled Transforming the Doctor’s Office: Principles from Evidence-based design (cover pictured at left) examines the ways in which research can be used to improve users' experience in outpatient settings, with an emphasis on the positive distractions, social support, and perceived control in the setting.

Her third book, from Cambridge University Press (2010), titled What Americans Build and Why: Psychological Perspectives, examines five areas of Americans' built environment: houses, healthcare facilities, schools, workplaces and shopping environments. Synthesizing information from both academic journals and the popular press, the book looks at the relationships of size and scale to the way Americans live their lives and how their way of life is fundamentally shaped by the highway system, cheap land and incentives. This book is timely because although Americans say they crave community, they continue to construct buildings, such as McMansions and big box stores, that make creating community a challenge.

Devlin also published a research methods book for students in the social sciences titled Research Methods: Planning, Conducting, and Presenting Research (Thomson Wadsworth, 2005). It is a hands-on, student-friendly text that addresses the practical aspects of one-semester social science research projects, using examples from a variety of sources that illustrate successful projects. Her first book, Mind and Maze: Spatial Cognition and Environmental Behavior, was published in 2001 by Praeger.

Devlin enjoys working with students, and many of her publications include student authors. In addition, she has a student research group whose projects have been presented at national conferences, including the Environmental Design Research Association. In 2000, she was elected to the Board of Directors of the Environmental Design Research Association. She is a recipient of the Student Government Association Teaching award for excellence in teaching.

Devlin served as College marshal from 2002-2015. The main responsibility of the marshal lies in is its public ceremonial role, that of leading the processional during ceremonies such as Commencement.

Devlin was the recipient of the 2012 Helen B. Regan Faculty Leadership Award, which recognizes faculty members who exemplify the College's commitment to shared governance, democratic process and campus community development. She received the John S. King Memorial Teaching Award in 2006.

Visit the psychology department website and Major in Psychology.