During the 2011-2012 academic year, CISLA was thrilled to be able to fund eight students to attend conferences or return to the site of their internships or other locations to continue their research for their Senior Integrative Projects.

Sarah Seigle '12 attended a conference in London over the Thanksgiving sponsored by the Institute for Cultural Diplomacy on Immigration and Integration In an Age of Austerity: Challenges and Opportunities. This was a perfect match for Sarah as she completed her honors thesis, “The Perception of Immigration in France and its Effects on French National Identity.” 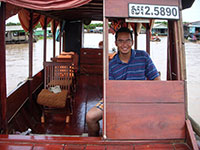 Pukar KC '12 was awarded two separate grants. First, he attended the Bahrain International Air Show and Trade Fair in Bahrain. Pukar’s senior integrative project is titled “The Liberalization of the Malaysian Aviation Industry.” He was able to interview many dignitaries and gather substantial information for his project. We also supported Pukar when he was invited to give a paper at the Academic and Business Research conference in San Antonio, Texas, in the spring. His paper was titled, “Assessment of the performance of micro-enterprises in rural Nepal over time.” The paper was published online in the Journal of Case Research in Business and Economics (JCRBE). It was extremely prestigious for an undergraduate to be invited to present a paper. 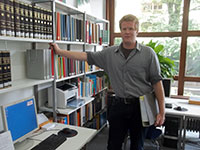 Ted Fisher '12 was awarded a travel grant to return to Germany to continue research at the German Federal Archives. There, he researched government documents and conducted interviews with police academy professors. Teddy reported that the trip was highly successful and he was able to collect important data to complete his Senior Integrative Project, “Defending a Growing Democracy: The German Response to Terrorism, 1970 to the Present.” 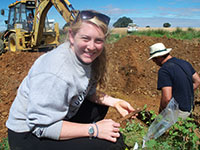 Katie Mullaley '12 spent her CISLA internship in Ponferrada, Spain, at the Association for the Recovery of Historical Memory, where she conducted research for her senior integrative project, “Confronting Franco’s Legacy: Changing Public Perceptions in Spain.” With her travel grant, Katie went to the Mandeville Special Collection Library at the University of California in San Diego, California. There, she was able to access primary material including political pamphlets, newspapers and posters of the time period she was researching. 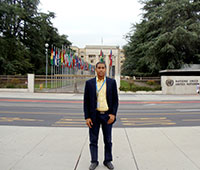 Manuel Jimenez '12 used his travel grant to attend the Annual Meeting of the International Monetary Fund and the World Bank Group in Washington, DC. He was thrilled to hear fascinating presentations by well-respected dignitaries and economists. His senior integrative project was titled "International Institutions and the Economic Development of Latin America."

Manuel also joined Aditya Harnal '13 in proposing a very interesting idea to the CISLA office: they wanted to organize a TEDx event on campus. TED (Technology, Entertainment and Design) is a global set of conferences owned by the private non-profit Sapling Foundation, formed to disseminate "ideas worth spreading." In order to do this, they had to attend a 5-day workshop in Long Beach, California. We funded this initiative and upon return they put together an extraordinary team of classmates who worked long hours to organize and produce a highly successful event titled “Rethinking Progress”. 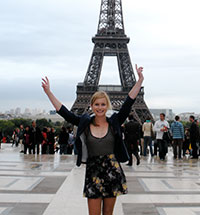 Catherine Lawton '12, a French and math major, returned to Paris during winter break to continue research and conduct interviews for her Senior Integrative Project, “A Comparative Study of the Traditional Family in France and the United States.”