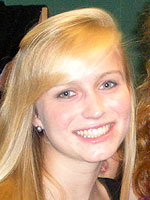 Since graduating from Connecticut College in 2012, Catherine searched for an employment that would utilize her analytical skill set and satisfy her strong interest and passion for the life sciences. She found this in Cambridge, Massachusetts, at a healthcare data analytics company, Truven Health Analytics, where she works as an analytic associate, using Truven’s data warehouse of healthcare claims to advise employers on how to improve their population health and lower their healthcare costs.

Internship
Summer 2011- Research in Paris, France, with the National Confederation of French Catholic Associations for her CISLA Senior Integrated Project that analyzed and compared the change in the traditional family in France and the United States. The project focused on the impact of religion, law and media on this change.

Study Away
Spring 2011 - Studied Neisseria Gonorrhea at the Institute of Alfred Fournier in Paris, France, in the lab of Doctor Patrice Sednaoui, bacteriology specialist.

Future Goal
In the near future, Catherine hopes to return to school to obtain a graduate degree in biostatistics or bioinformatics.‌

"The Science Leaders Program expanded my world of science to lengths that I never even imagined. There aren't many people who can say that they've been to the brightest biobay in the world! It was an experience that I'll always remember."