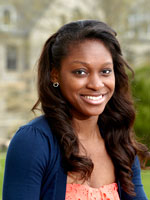 Earned a Master's of Science degree in management concentrating in eldercare administration at Lasell College.

Works as a clinical research assistant/psychometrician at Boston University Alzheimer’s Disease Research Center. Her work involves administering neuropsychological tests on participants for various studies regarding Alzheimer’s Disease, Repetitive Brain Trauma (RBT), and other memory disorders. She is also studying for the MCAT, taking night classes at BU to keep her knowledge in the hard sciences fresh, and working periodically as a real estate agent in Boston.

Research
Summer 2010 - Professor Zimmer's computational chemistry lab
Summer 2009 - Cared for one of her mother's patients in an assisted living facility who was suffering from Alzheimer's disease. Through daily assistance of the patient, she was able to gain a more personal insight to the world of elderly care and assisted living facilities