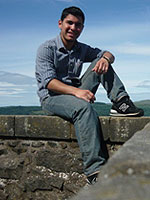 After graduating from Connecticut College, worked as an opthalmic medical assistant at a private practice (Janigian Retina Associates) in Providence, Rhode Island, enhancing his clinical experience and talking with patients about their current vision status, medications, medical and social history, and future eye procedures. He also became proficient in eye diagnostic testing, including measurement of intraocular pressure, optical coherence tomography (OCT), and intravenous fluorescein angiography (IVFA. During the evenings, he volunteered as a medical interpreter at the Rhode Island Free Clinic (RIFC) and served as the liaison between Spanish-speaking patients within the Providence community and physicians.

Internships
Summer 2011 - BioSTEP, Yale University, researching polycystic kidney disease, a genetic disorder characterized by the growth of numerous cysts in the kidneys.
Summer 2010 - Joined a research group with more than 30 PhD students from all over Europe at one of the United Kingdom's leading universities, the University of Strathclyde, Glasgow, Scotland, examining nanometrology: the science of locating and pinpointing molecules on a scale invisible to microscopes

"I'm glad to be a Science Leader. Not only has it given me the opportunity to form network ties with students that share many of the same career and life goals as I do, but it has also provided me with a wonderful blend of academia and research pivotal to my undergraduate experience at Connecticut College."