A winter break in Antigua, Guatemala

One of the great things about college — besides the interesting classes, independence, etc. — is the time off. It's the epitome of the "work hard, play hard" saying. After short periods of intensive study, there are so many ways to spend our month off in winter and three months off in the summer, from internships to traveling. For me, I received the good news that I was accepted into Connecticut College’s Toor Cummings Center for International Studies and the Liberal Arts, or CISLA. The goal of this center is to internationalize one’s major. Mine being history, my research proposal involves studying art that was produced under the strict censorship policies of Franco’s dictatorship in Spain, exploring topics such as propaganda as art and “cultural wastelands.” So next year, I will be studying and interning abroad in Spain. This means, however, that I have to get my Spanish in gear. My favorite part of the program is its emphasis on language learning, which inspired my recent trip to Guatemala.

Not having spoken Spanish in about a year, it's safe to say my language skills were pretty rusty. So for winter break, I headed off to Don Pedro de Alvarado language school in Antigua, Guatemala. Trying to play catch up, I studied for six hours a day with two different tutors. Contrary to what you might think, the time flew by, especially since the emphasis of my one-on-one tutoring was conversational skills. Every day, I simply spoke with my teachers about my life, their lives, and everything else in between. By the end, I can safely say they became more than just my teachers, they became my friends. They would take me around the city and show me cool art galleries, restaurants and church ruins. My afternoon teacher, Lidia, and I even took a day trip to El Lago de Atitlan. A three-hour trip on Guatemala’s famous “chicken buses,” the day was certainly an experience, from riding on a boat across a beautiful lake to having the man who was sitting next to me on the bus try to baptize me. 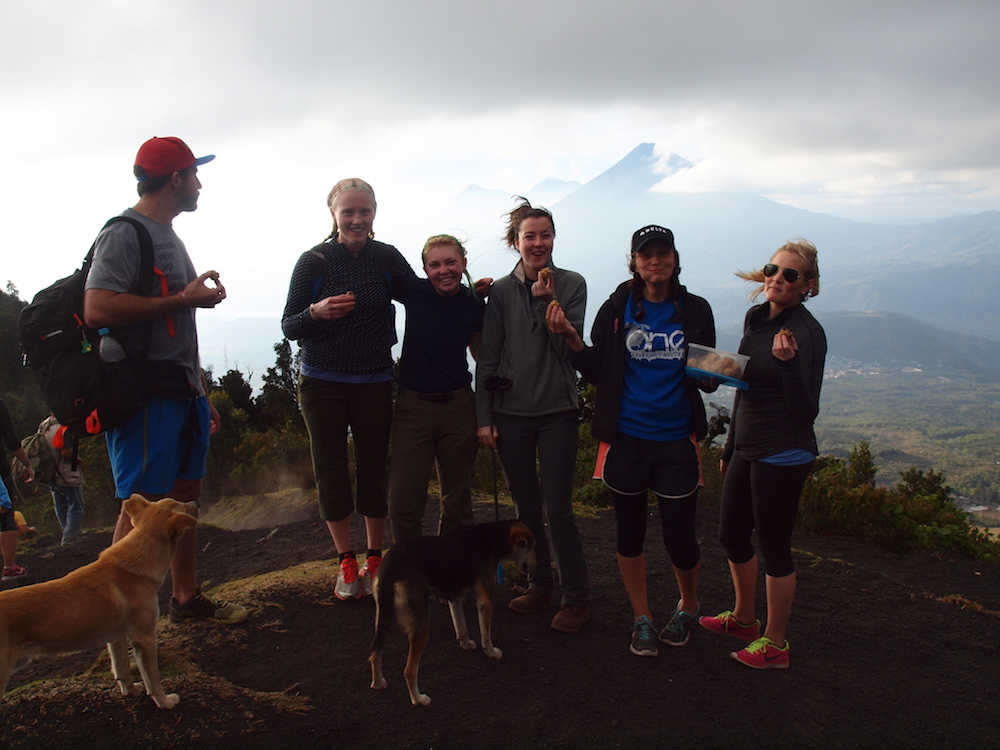 During my time in Antigua, I was staying with la familia Darce Pineda, my host family. I was one of five students staying with the family. The atmosphere was so warm that all of us were truly welcomed into the family — from attending their 3-year-old son Renecito’s birthday party to supporting them at their gigs (they are a family of musicians). The picture at the top left of this post is the view from their house’s terrace. In the background, el Volcan de Fuego (the volcano of fire) is erupting. Not to worry — it wasn’t a major eruption, but it is highly active and spurts smoke and ash on a daily basis. Pretty cool, huh? The second photo is of me and some fellow students at the top of Pecaya, another nearby active volcano we climbed one Saturday. While Pecaya is also not majorly active, we did get to roast marshmallows over lava. Yes, I know it sounds a little far-fetched, but really it did happen. It was also probably the best smore ever. While the lava has cooled and hardened, there are cracks that run though it, exposing hot coals exactly the same as what we would see in a dying fire, making for the perfect place to roast a marshmallow.

If I were to ever give advice to a college student, it would be to take advantage of all the time off. It gives us a freedom to study, travel and explore in a way that a full-time job does not. I got to connect my studies at school with an incredible culture opportunity. My Spanish improved greatly, I can happily say I feel more prepared for CISLA, and I got to have some cool adventures along the way.