Does Capitalism Work For You? 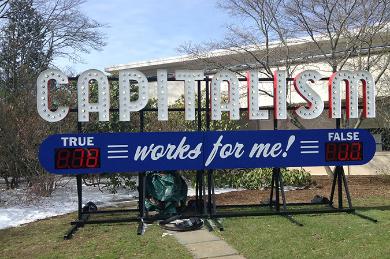 Being a liberal arts college, Conn has hosted numerous exhibitions over the years.  Even so, none of them are quite like the sight that greeted students when they returned from spring break.

Created by multimedia artist Steve Lambert and funded through Kickstarter, “Capitalism Works For Me!” is a massive 20-foot-long interactive piece, which encourages passersby to seriously question the effectiveness of a capitalist society. After debuting in Cleveland in the summer of 2011, the piece has toured all around the country, challenging everyone who comes across it to engage in meaningful discussion about a topic that can be considered taboo.

“As a culture, we need the vision and boldness it takes to discuss the problem [capitalism] itself,” Lambert explains on his website. “The idea that 'there is no alternative' to the way our world works takes away our ability to dream. As citizens we need the courage to begin these discussions in order to move on to new and better visions for the future… [and art] creates a space where new ideas and perspectives can be explored.”

The aesthetic of the work is firmly rooted in early-mid 20th century American propaganda and advertising. By drawing comparisons to the large, gaudy signs of yesteryear, Lambert alludes to how capitalism has become ubiquitous with our national identity, while simultaneously questioning the paradox of societal progress. If things like rights for minorities can evolve so drastically over the course of a century or two, why can’t our economic system see similar reforms? More importantly, why aren’t we willing to consider a non-capitalist approach to our economy when recessions and mass layoffs affect millions of people in a negative way?

“For 50 years it has been unacceptable, politically, in the United States to ask what is basically a straightforward question,” Lambert claims. “We have every right as a society to ask of that system [capitalism], is it working for us? Do the benefits and the costs balance themselves out…? We’ve been afraid to ask that question—and we’ve been afraid to have public debates—that’s the legacy of the Cold War. We can’t afford anymore to not do that. We have to raise the question.”

In my time here as a student, I’ve noticed that the campus community doesn’t shy away from talking about difficult issues. Student-run grassroots organizations like Conn Students in Solidarity with Palestine, Conn C.A.R.E.S, La Unidad, Active Minds, Students Organized Against Racism, and GSA bring attention to issues of inequity and injustice which many of us would rather pretend don’t exist. It’s not uncommon to hear people muttering under their breath that campus policy leans too far left or students are too liberal for their own good.  Even something like a Black Lives Matter rally—which I participated in with more than 100 other students last semester—can draw anonymous criticism on Yik-Yak for promoting reverse racism and making people feel uncomfortable, despite the fact that the movement has become ubiquitous with millennials across the nation. As such, it shouldn’t be surprising that some students have referred to the campus-sponsored exhibition of “Capitalism Works For Me!” as a “very Conn thing to do.”

However, the people who attended the official opening of the work on March 30 were incredibly enthusiastic, braving the cold to test out the true/false button and watching eagerly to see how each person responded. They represent what Conn is all about: putting the liberal arts into action to make the world a better place, and not letting their convictions waver against undercurrents of criticism and disdain. That’s what attracted me to Conn in the first place, and I’m excited to see how “Capitalism Works For Me!” shifts conversation on campus.

Find out more about Steve Lambert and “Capitalism Works For Me!” at: http://visitsteve.com.