Day 6: Our Longest Drive Yet

Bloggers Daniella Maney, ‘20 and Mark McPhillips, ‘20 embarked on a road trip this summer with their friend Samuel Piller, ‘20 before coming back to Conn. We will publish a series of posts about what they experienced along the way.... (Read Post 1)

Day six was one of the longest drives of my life. It was comparable to my spring break return trip with the Conn Club Ultimate Frisbee team from Myrtle Beach, South Carolina, to Acton, Massachusetts, which took 12 hours and 40 minutes. Leaving from Oklahoma City, we had a 10 1/2-hour-long drive ahead of us, a tough feat after driving consistently for a week. However, it was a trip we were excited to embark on because we had our eyes set on the prize destinations of Dallas and New Orleans. This was definitely the longest drive of our trip so far. The second longest was from Neptune, New Jersey, to Columbus, Ohio, which took a total of nine hours. Many of these times are projected by Google. It's hard to remember how long our drives actually were because when you account for gas, bathroom, and food you add at least an hour or two to each trip.

On the way to Dallas, we stopped to get Sonic for a bite to eat before heading back on the road. When we arrived in Dallas, we went into a mall to get Texas paraphernalia. We needed to ensure we found our postcards, especially after our Kansas fiasco. The mall was unlike any other I’ve seen. It had palm trees that went all the way from the bottom floor to the ceiling of the second floor.Texas Treasures was a funny gift shop we found on the second floor of the mall. Inside the gift store, I bought a postcard that says “Everything is bigger in Texas” and a small Texas license plate with my niece’s name on it as a gift to bring to her when I get back home. 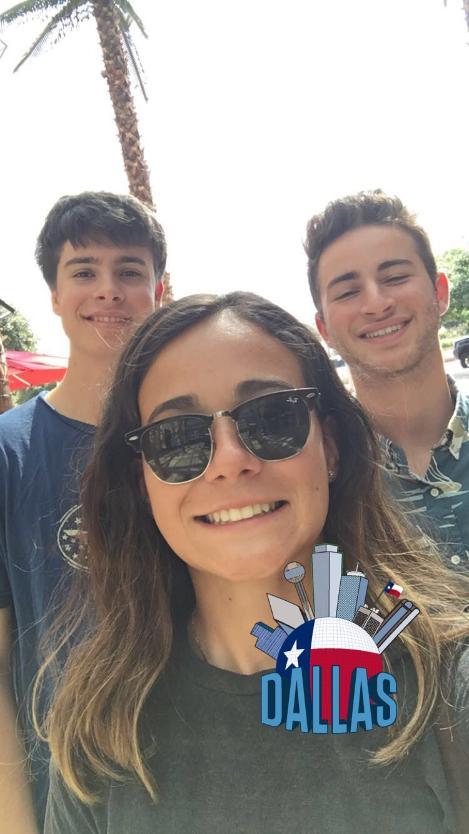 After buying some fun knick knacks we left the mall and went back into the Texas heat. Texas was HOT unlike anywhere else I’ve been, like sticky hot. Back on the road, we noticed an In-n-Out Burger! This was amazing to all of us as the fast food chain is primarily located on the West Coast. Since this trip is the farthest west both Samuel and I have ever been we decided we had to stop and try In-and-Out for the first time. I was still completely stuffed to the brim with Sonic food so I sadly did not order any, but luckily Mark and Samuel let me try their Animal Fries and cheeseburgers.

With Samuel slumped over from overindulgence, we returned back to the road. Mark was at the wheel until approximately 11:30 p.m. when we stopped at a local gas station to change drivers. Inside the gas station, there was some local Tex-Mex treats. I got tortillas with chocolate chips, which resembled chocolate chip cookies. They were a little dry but equally as good as a traditional Nabisco. I drove until we reached the hotel in New Orleans at 3:30 a.m. I admittedly started seeing things while driving through the depths of the Louisiana bayous, and I was extremely relieved to stop and sleep.

Back to all Articles