In the beginning of my first semester at Conn, I joined the club Ultimate Frisbee team, and even though the spring tournaments Riptide and High Tide were months away, returning team members talked constantly about how great spring break was going to be. So I knew I was in for a fun time when I set out to spend my spring break with 40 of my friends.

For the tournaments, the team reserves a house in North Myrtle Beach, South Carolina. Those who are able to pay contribute a certain amount, and there are funds to cover those who cannot pay. After many months of planning, meetings about logistics and representing Conn while off campus, spring break arrived. About nine full cars tackled the 13-hour drive from the Connecticut College campus to North Myrtle Beach with stops at the houses of team members who live along the route to South Carolina. My car stopped at a senior’s house in New York City for the night, we ate dinner with his family then went to bed because we had to wake up at 5 a.m. to get to the house on time. When we finally arrived in South Carolina everyone was buzzing. Each floor had a balcony, making it easy to see who was running around on the beach that was our backyard. We had one day to hang around on the beach and get accommodated before we were off to compete in our first tournament, Riptide, which lasted an entire weekend.

During Riptide we played Bowdoin College, Hamilton College and the University of Georgia. As a team of mainly new players, we had some hard-fought games. Though there were some close losses, we started to learn how to work really well together and the games got progressively better throughout the day. The second day of the tournament there was a hailstorm and the team we were supposed to play forfeited, so we headed back to the house and used the hot tub to warm up.

After taking Sunday and Monday off, we went back to the grindstone to compete in the three-day tournament High Tide. With fresh legs and more confidence, we tackled the three days of competition, battling surprisingly cold South Carolina weather, playing teams like Lehigh University, American University, and Purdue University. My favorite game was against Mount Holyoke College. They arrived really late because their team captains misread the schedule, so we only had time to play two points, both of which were played by the F Line (first years). It was great to play with all of my friends who don't have as much experience as the returners to the team, and this feeling was made especially sweet when we won both points of the game. When we weren't playing frisbee, we prepared food in one of the three kitchens in the house and played outside on the soft sandy beach.

Pictured below: My teammates and I basking in the South Carolina sun (left) and our beach house for the week (right). 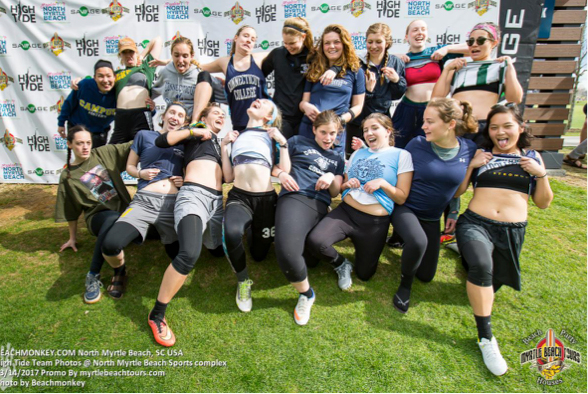 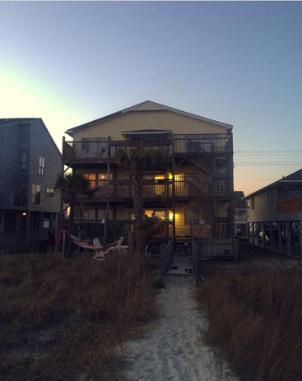